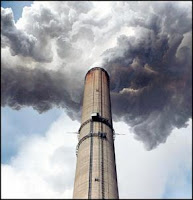 It’s no surprise that the Green Party are supporting Labour’s carbon trading scheme. This is what co-leader and former socialist Russell Norman would call using ‘the power of the market’ to address environmental issues.

His party long ago abandoned any notion of fundamental change - ever since former leader Rod Donald invited ‘the captains of industry’ to Green HQ for wine and cheese and an reassuring word or two about not rocking the capitalist boat.

No, the Green Party has definitely acquired a blue hue. The likes of Norman and Fitzmaurice think they can create a ‘kinder and gentler capitalism’by using market mechanisms.

Even Sue Bradford, someone not unfamiliar with socialist politics, is promoting and supporting a ‘market’ solution to ‘global warming’. Hey, stick a tree on top of the whole unedifying capitalist structure and that’s apparently ‘progressive’!

Under carbon trading programs, corporations and others that release greenhouse gases can either agree to reduce their carbon emissions or buy the right to keep polluting.

It is a system whereby polluters are encouraged to take financial responsibility for their carbon emissions rather than necessarily reduce them.

But the reality is that carbon trading schemes simply allow companies who are the biggest emitters of greenhouse gases to continue to pollute.

It is also a new way for corporations to make money.

Trading carbon credits grew to be a $60 billion industry last year, up from just $33 billion in 2006.

It has become as source of windfall profits for the polluters who have invested little or none of that profit in low carbon technologies.

Environmental-justice organizations like Carbon Trade Watch argue that the carbon trading schemes are highly flawed. With no regulatory framework to verify claimed reductions, hundreds of credit-generating projects are being realized under corporate self-monitoring, dangerously relying on the polluters’ own integrity. These potential conflicts of interest were at the heart of the Enron and Arthur Andersen scandals, both pioneers in emissions trading.

‘Multinational corporations are trying to commodify the air, really, and the pollution in the air. They want the right to do that, and they want to commodify it with the legal language of contracts and put a price on it and get credit for having already polluted.’

In contrast to the tepid and reactionary poliics of the right-wing Green Party, eco-socialists say that the class struggle must be taken into the campaign against global warming.

As Dunedin political scientist Bryce Edwards has pointed out:

‘The carbon trading policy will hit the poor the hardest - which is in line with other Labour-Green-National policies. Transport, food, and electricity costs will rise significantly under the scheme. Power bills will rise by up to 10 percent, and petrol will cost up to 6 cents a litre more.’

While the Green Party see rising prices as a disincentive to consume without any care for the impact that this has on poor people, the eco-socialist movement says that the fight must be about achieving non-reformable reforms like a consumption tax on the rich and free basic electricity and water

Says Patrick Bond: ‘a serious challenge to the capitalist system is what we need now to save the planet. An organised socialist planet is going to be required.’

It’s unfortunate that this message has fallen on deaf ears within the New Zealand Green Party.
Posted by Steven Cowan on Monday, September 01, 2008