THE MAORI PARTY: NO FRIEND OF MAORI WORKERS 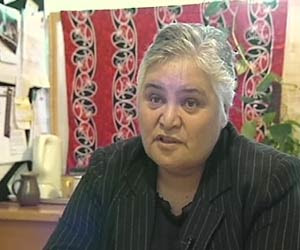 Ah yes, there they are - the rich conservative Maori elite in, and connected to, the Maori Party - about to railroad a deal through with National and pretending their doing it for the benefit of all Maori. If you believe this then you will also believe that the Green Party isn't just another market party. Yes, you are deluded.

Take silly old Duncan Garner at TV3. Taking a break from looking for 'scandals', 'Scoop' Garner would like us to believe that John Key, in the centre, is playing the Act Party on the right off against the Maori Party on the left.

Garner is a clown but his dumbness appears to be prevalent among mainstream journalists who don't know any better.

The Maori Party is a right wing party.

Let us examine the Maori Party's view on welfare, something it has said it regards as a priority issue.

Maori Party co-leader Tariana Turia has been a guest speaker at an Act Party conference and has openly said that the Maori Party's views on welfare are similar to that of Act.

Indeed the Maori Party's talk about ' welfare dependency' and so forth is clearly aimed at blaming the individuals for their economic situation and not the economic system that generated it in the first place.

Turia sounds like Rodney Hide or Roger Douglas when she talks of 'the state' intruding into people's lives and of 'welfare' being a 'blight' on Maori.

The Maori Party's solution? It's a throwback to the 1980s and the discredited and punitive 'work for the dole' schemes.

It's not the about changing the economic system, which the Maori elite are financially benefiting from, its about zeroing in on the individual and holding them responsible.

In fact it is clear that the Maori Party would like to take some welfare services away from the state and into the hands of Maori social service providers. One of the advocates for such policies is John Tamihere who has been actively promoting this agenda on his Radio Live talkback show and has been lobbying for a deal with National at the present series of hui.

As an aside, Tamihere's agenda is particularly hypocritical. This guy supported the free market policies that wreaked such devastation among working class communities, Maori included. Today we are seeing the consequences of those policies yet Tamihere isn't being held to account. Instead he gets away with blaming Maori themselves for their economic situation - a plight brought about by the very same economic policies he supports. In other words, he's putting the boot in twice. With friends like John Tamihere, who needs enemies?

That his talkback co-host, former Alliance MP Willie Jackson is following Tamihere's lead says it all about the bankruptcy of Jackson's politics. It's no surprise that the wealthy Jackson is rumoured to be joining the Maori Party.

And there are many other conservative facets to the Maori Party - it voted against the Civil Union bill, it is in favour of privately-run prisons, it has even said it would not necessarily oppose the sale of public assets.

All this is ample evidence that the Maori Party is not a left wing or progressive party and the natural inclination of the Maori elite is to side with National. They have been aided by a general Maori disatisfaction with Labour.

Of course neither Turia or Peter Sharples will own up to being a conservative party and they instead conceal it under the camouflage of Maori nationalism, talking about 'all Maori' as if they all had the same interests. What has the unemployed Maori guy in Northland or the Maori woman working a low paid factory job in Auckland have in common with the wealthy Maori elite? Nothing.

Tumeke's Martyn Bradbury, his Labour Party sympathies aside, did make a good observation when he questioned whether the Maori Party was really speaking for all Maori or just a narrow self-interested group.

Maori are predominantly working class and their interests lie in promoting and defending those class interests - and that means forging alliances with the Pakeha working class.

The conservative pro-capitalist Maori Party is no friend of the working class and, as unemployment rockets over the coming months, watch the Maori Party elite side with business interests.
Posted by Steven Cowan on Saturday, November 15, 2008