CAUGHT IN HIS CONTRADICTION 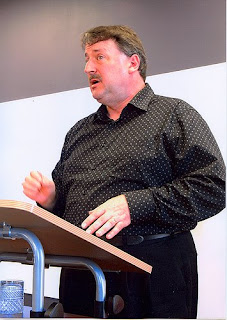 The rub is that Chris Trotter wants to be 'progressive' and support Labour as well. The problem is he can be one but he can't be both. This is the contradiction that Trotter is seemingly incapable of getting himself out of.

Chris Trotter is a man of contradiction - especially since the demise of his Clark government, a government he consistently defended.

On the one hand he's managed to carve out a place for himself as a newspaper columnist and the 'goto' guy whenever the mainstream media wants a 'leftish' comment.

He is, for the corporate media, the 'acceptable face' of left wing politics - the guy who sounds vaguely dissenting but, in the end, won't frighten the horses. The very-right-wing Paul Henry regards him as New Zealand's 'leading political commentator'. This is the same Henry who has a low opinion of John Pilger and Robert Fisk.

But since the election defeat of the Clark government, Trotter has been having a go at what he regards as the silly and unrealistic 'far left' - which is basically anyone to the left of Labour.

In his weekly newspaper column of a fortnight or so ago, he threw out the hackneyed old prejudice that the 'far left' welcomed the election of the John Key government because it would make life hell for the working class - because it would make them more 'receptive' to socialist politics.

Putting aside Trotter's implication that life was dandy for workers under the Labour-led government - which it wasn't - Trotter's charge only holds water against what is commonly referred to as 'ultra leftism'.

I don't need to rehearse the arguments here - and Trotter knows them too well - but revolutionary socialists do not reject the struggle for reform, they embrace it!

You will find revolutionary socialists on the picket line, involved in various single-issue campaigns, in community groups. They are fighting for the implementation of measures that will make the lives of ordinary people better now. They are not holed up in some office or bedsit somewhere, rubbing their hands in glee whenever the government sticks it to the working class.

Of course it is true that, unlike Chris Trotter, the socialist left has no illusions about the nature of the Labour Party.

While Trotter might get invited on stage at Labour Party conferences- is he a card-carrying Labour member? - the left sees no significant difference between National and Labour. While Trotter is chatting away with Labour MP's over wine and cheese, the 'silly' and 'impractical' socialist left is outside the conference hall protesting.

I can see Chris Trotter at the conference window now, another glass of chardonnay in hand. 'Look at those deluded socialists,' he says complacently. 'They should be in here having wine and canapes.'

The difference in having a National Government is purely organisational, which Bryce Edwards pointed out in a response to Trotter's newspaper column:

.'we believe that the "silver lining" of having a National Government is that it will actually provide greater opportunities for real fightbacks against workers rights to be built than when Labour is in power. This isn't really a positive comment on having a National government but a critique of how the left and the trade union movement capitulate to anti-worker governments that are led by the Labour Party.'

But Trotter, despite the overwhelming evidence to the contrary, rejects the charge that Labour is anti-worker.

In a response to Edwards, Trotter argued that Labour couldn't be anti-worker because it got 796,880 party votes, mostly from working class voters.

The absurdity of this argument becomes clear when we consider that National garnered a fair few 'working class votes' as well.

What Trotter is trying to avoid here is any real scrutiny of social democratic politics.

He has, admittedly, pondered on the 'paternalism' of the Clark government but he is merely trying to reinvent a creed that died a death many years ago. Isn't it time to switch off the life support, Chris?

Social democracy, Labour politics, have moved to the right to embrace free market policies and ideology. Labour is no longer a transmission belt for new ideas but rather just another parliamentary face of corporate capitalism.

I'd have more time for Labour if I heard some talk about such things as direct democracy, self-management, worker-cooperatives and a critique of the capitalist financial system- but I don't. I just hear the same dreary pro-market stuff I've heard for more years than I care to remember.

In his most recent blog post Trotter urges the young Resident Action Movement (RAM) candidate Oliver Woods to get involved in 'building up' the so-called 'progressive' forces within Labour.

Having accused the socialist left of elitism, Trotter sounds positively condescending as he urges the 'wayward' Woods to recognise the 'error' of his ways and get involved with Labour. Take a hundred lines Master Woods - 'I must recognise the error of my ways.'

Woods is in good company - Trotter doesn't think much of John A. Lee either.

And who are these 'progressive forces' anyway? Apparently they are the MP's Grant Robertson, Clare Curran and Phil Twyford. Well, if these three are 'progressive' they have certainly been keeping it a secret.

All these MP's are comfortable with the free market economic policies of Labour. They are typical career politicians.

The rub is that Chris Trotter wants to be 'progressive' and support Labour as well. The problem is he can be one but he can't be both. This is the contradiction that Trotter is seemingly incapable of getting himself out of.
Posted by Steven Cowan on Monday, December 22, 2008