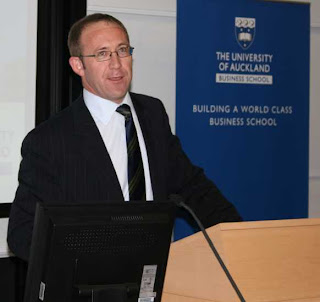 Columnist Chris Trotter was recently urging the socialist left to stop wasting its time and get in behind the Labour Party and, more specifically, those great new 'socialist hopes' MP's Clare Curran and Phil Twyford.

The socialist left has basically told Trotter 'thanks, but no thanks.'

However I was interested to see that The Standard, which claims it isn't a mouthpiece for the Labour Party, has introduced Clare Curran as a 'guest columnist'.

Of course there's nothing wrong with that but it does indicate that The Standard's thinking mirrors that of Mr Trotter.

While I'm on the topic of The Standard its also interesting to note that it has been generally supportive of the upcoming 'Jobs Summit' - this is unusual as normally it lambasts anything to do with the National-led Government.

Indeed one of The Standard's more prolific writers 'Steve Pierson' - aka Clinton Smith - grudgingly remarks that the conference is 'better than nothing' (Feb 4). Smith was the organiser of a demonstration outside the National Party conference last year. He is a Labour Party supporter.

Meanwhile, good old 'Tane' has pretty much kept his mouth shut on the 'Jobs Summit'.

This may well be because his boss Andrew Little, the dismal President of the Engineering, Printers and Manufacturing Union, (EPMU) is participating in the discussions on how to prop up the New Zealand business class.

Little has consistently sold workers down the river so we should all be worried about what he might be tempted to offer at the 'summit' - especially since he is chairing the Jobs summit 'sub-group'.

NZ Management magazine said this of Fyfe back in September 2006:

'Ever since he took over as Air New Zealand CEO at the end of last year, he's waved the company axe over pretty much everyone and everything -engineers, marketing, human resources, finance, cleaners and ground staff.'

With the help of Andrew Little, Fyfe was able to force Air New Zealand engineers to 'agree' to reduced pay and conditions . Fyfe's ultimatum? Accept the new conditions or you're jobs will be outsourced.

In December last year Fyfe announced that a further 200 Air New Zealand workers would be losing their jobs and, again, Little and the EPMU did nothing. Oh, they released a press statement - possibly 'Tane' wrote it.

I'm sure 'Tane' will find something positive to say about the 'Jobs Summit', especially when it comes to Little's role in it all.

'Tane' is Neale Jones and Jones is the EPMU's 'Communications Advisor', otherwise known as a spin doctor.
Posted by Steven Cowan on Friday, February 20, 2009