Home » anzac day » WE WILL NOT CEASE

WE WILL NOT CEASE 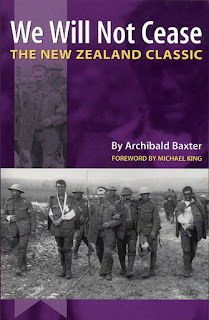 I listened to a little talkback radio yesterday which, like most of the media yesterday, went into Anzac Day overdrive.

'Lest we forget' was the common theme but as Dean Parker in the New Zealand Herald has pointed out there's also a selective and ultimately conservative view being presented of New Zealand's involvement in war generally. It's a view that 'deletes' from history those New Zealanders who don't quite fit the mould of 'the brave New Zealand soldier defending the freedoms that we enjoy today.'

Dean Parker observes little or no mention is made of New Zealanders who went to fight Franco's fascists in Spain in the late 1930s - what proved to be a 'dress rehearsal' for World War Two.

Parker recalls the story of Tom Spiller, a member of the New Zealand Communist Party, who after fighting in Spain as part of the 'International Brigades', was told he was unfit to join the New Zealand army.

At the end of the war, fascism defeated, he turned up for the Anzac Day parade.

He was told his Spanish service didn't make him a real war veteran, so he wasn't allowed to march with the RSA. But he could march by himself, at the back.

As Joe Hendren points out:

Britain and France, instead of leaping to support the Republican government of Spain when it faced a military coup d'etat in 1936, chose to place an embargo on support for the besieged democracy. Only two governments spoke up to defend democratic Spain in the League of Nations - the USSR and the New Zealand's first Labour government. This is the genesis of New Zealand's independent foreign policy, not David Lange's reluctant establishment of the anti-nuclear ban. In 1936, the New Zealand National Party were indignant Labour were failing to support our traditional allies - in other words the National party are the original promoters of appeasement in New Zealand.

It should also be pointed out that Spiller's own communists - acting on instructions from Moscow - sold out the emerging Spanish Revolution and turned their guns on the Trotskyists and anarchists. George Orwell gives a vivid portrayal of the Stalinist betrayal in Homage To Catalonia.

There is also not much talk of New Zealand's conscientious objectors on ANZAC day. I certainly didn't hear them recalled on either talkback or in the many media news stories.

The Minister of Defence at the time, James Allen, had no sympathy for conscientious objectors - and thought they should be sent off to the killing fields of Europe anyway.

Conscientious objectors were sent to the Trentham military camp where over a hundred men were housed. In 1917 the military top brass came up with the idea of relieving the overcrowding by sending fourteen of the more 'difficult' obejectors to Britain on a troopship. Among the fourteen were Archibald Baxter and his brothers John and Alexander. Archibald wrote about his experiences in We Will Not Cease.

Another objector sent to Britain was Mark Briggs. He had refused to participate in the war on socialist grounds. He appears to have been an 'independent' socialist and not one to take his instructions from Uncle Joe.

Briggs ended up in Etaples in France in October 1917 where he refused to walk, stand, salute or wear uniform. He soon found himself in the trenches where he met Archibald Baxter.

Every day the other conscientious objectors were forced to walk the thousand yards or so to the frontline. Briggs refused and military police tied wire around him and dragged him to the front. Dragged back to camp again he was denied medical treatment.

In early 1919 he was invalided back to New Zealand. He refused the soldier's wage that was offered to him.

Maori conscientious objectors also faced the wrath of the Crown.

Kingitanga leader Te Puea Herangi offered refuge at Te Paina pa (Mangatawhiri) for Maori who chose to ignore the ballot. Maori who refused to serve were denounced as 'traitors' by the government.

The arrested men were taken to an Auckland army camp where, for refusing to cooperate, were subject to a battery of military punishments, including being fed only bread and water and being supplied with minimal bedding. When all this failed to convince the men to join the war effort, some were sentenced to two years' hard labour at Mount Eden prison.

Only a handful of Tainui men were ever put into uniform, and none of the Tainui conscripts were sent overseas.

Unfortunately on Anzac Day it appears that we are just a little too eager to airbrush these men out of the picture.
Posted by Steven Cowan on Sunday, April 26, 2009