Home » labour » trotter » LEFT IS RIGHT AND RIGHT IS LEFT

LEFT IS RIGHT AND RIGHT IS LEFT 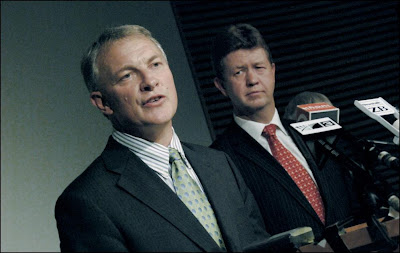 Chris Trotter has been crying into his computer again.

Chris can't understand why National lead Labour by the proverbial country mile in the opinion polls, despite the fact the economy is going to hell in handcart.

Trotter searches for answers in all the wrong places.

In his newspaper column (May 1 ) he blames the media:

Okay, a lot of the blame for this has to be laid at the feet of this country’s most listened-to commentators, nearly all of whom are vehement right-wing talkback hosts who’ve spent the last three years campaigning quite unashamedly for a change of government, and who are so generously remunerated that, to their ears, all this gloomy chatter about "the most serious economic crisis in 70 years" sounds utterly bizarre.

Trotter strangely doesn't mention television commentators. Perhaps that's because he's one himself and he appears to be on chummy terms with right wingers like Mathew Hooton and the awful Paul Henry. A case of not biting the hand that feeds you?

So there must be something else. What can it be?

Trotter, carefully avoiding the elephant in the room labelled 'Labour Party' says it all the fault of the stupid old voters! Apparently some of us are 'in denial' and doing a fair old imitation of Forrest Gump to boot.

But Dr Trotter, what are the voters denying? He writes:

...what are the voters denying? Easy. They’re denying they need anybody’s help to survive and prosper; they’re denying that their social and economic security’s got anything to do with Labour, or the working-class traditions of solidarity and struggle it stands for. They’re also denying the all-too-visible signs that "nice Mr Key" and his right-wing mates are preparing to rip the guts out of what’s left of the welfare state.

That's the problem with pop psychology - it's superficial and explains nothing.

Actually, the voters are denying nothing when it comes to Labour. Having been on the receiving end of Labour's fundamentally anti-working class policies, they are entirely correct to say that social and economic security has nothing to do with Labour. Labour worked entirely within the confines of capitalism for nine years and at the last election they had nothing to offer but the peculiar message that we should 'trust them'.

Of course, Chris is running an agenda here. Can you guess what it is?

To continue with his lame argument, Chris says that people are denying that National sucks because if two-thirds of them didn't believe New Zealand was "heading in the right direction", they’d have no excuse for not heading up Queen Street and turning left.

Here's the rub. If you follow Trotter's directions you'd head up Queen Street and turn left into the arms of .....Phil Goff and the Labour Party! What a letdown.

If you really did want to find Labour - god knows why - you would have to turn right at the top of Queen Street.

And, once there, we'd find Chris Trotter - mooching around in the rubble of Labour's social democratic tradition - trying to maintain the increasingy surreal fiction that there really is a difference between Labour and National. Phil Goff is there too of course, along with Mt Albert candidate Dave Shearer. He apparently thinks private armies are a good idea.

Phil Goff is already on record that Labour intends to stand on broadly the same economic policies in 2011 that led to is defeat in 2008. Mmm, you won't find mention of that on Bowalley Road or on The Standard.

How on earth can anyone be inspired to support Labour when its leader just wants to be John Key?

If Labour were different -as Trotter tediously keeps on asserting they are - then why are they are not offering an economic alternative to neoliberalism? Why are they simply offering more of the same old tripe?

These questions are often asked but they are never answered. It's easier just to take pot shots at John Key or blame the media or the electorate for Labour's obvious failings. There's not a lot of intellectual honesty at work here.

Why would any worker support Labour when its run by a discredited bunch of neoliberal hacks offering virtually the same set of failed economic polices as National?
Posted by Steven Cowan on Monday, May 04, 2009