ON THE ROAD TO NOWHERE 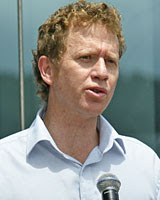 It was hardly a revelation by the Sunday Star Times yesterday that Sue Bradford resigned from the Green Party because she disagreed with the direction that the party was being taken by the conservative leadership of Russel Norman and Jeanette Fitzsimons. The election of the bland and equally as conservative Metiria Turei as Fitzsimons successor simply brought matters to a head. Bradford saw the writing on the wall and decided that was it. Hasta la vista Russel!

For anyone inside the Greens who still retains their critical faculties and holds out the prospect for a progressive solution to New Zealand's economic and political problems, the Green Party must be a lonely place indeed. About as lonely as being a socialist in the Labour Party in fact.

Are these poor Green members awakened by nightmares of yet another monotonous Russel Norman speech about 'market mechanisms' to achieve environmental goals? Do they feel sick when they hear Metiria Turei - marginally more exciting than a dishcloth - talking about broadening the Green's support to include people like Mr and Mrs Tory Voter of Remuera?

Although the Green's started to shift right once they departed the Alliance, the pace was accelerated once little Russel arrived - having already discarded his former socialist politics for the politics of neoliberalism.

In quick succession, the Green Party has bid farewell to most of the programmatic points and positions with which they attracted their base supporters for many years.

The lack of any real debate within the Green Party and the election of Turei has demonstrated to all that the very real monotony of bourgeois politics has settled on the Green Party like a wet blanket.

Norman, the person most responsible for taking the Green Party down the neoliberal road to nowhere, has been trying to mitigate the damage that Bradford's resignation has done to the Green's - and his - credibility. Having spent a lot of his time currying favour with New Zealand business, Norman's sudden reference to his own 'workng class childhood' was as calculated as it was cynical.

He told the Sunday Star Times that the Green Party was as committed as ever to 'social justice.' and would not turn its back on working people. What Norman didn't say is that he believes that 'social justice' can be achieved without any radical change in economic policies.

Norman has become adept at churning out the meaningless rhetoric and the catchphrases - which is not surprising since he is just another one of those politicians who thinks modern politics is all about advertising agencies and marketing.

Thanks largely to Norman, the Green's 'radical veneer', always paper-thin, has been stripped away to reveal a party that is no different from National or Labour.
Posted by Steven Cowan on Monday, October 12, 2009