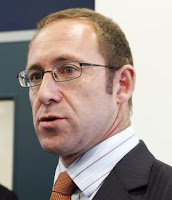 While an increasingly befuddled operation continues its attempt to rescue the twenty nine men trapped in the Pike River mine, politicians and union leaders alike are rushing to the defence of the mining company.

While geologists warned of the danger of gas explosions at the mine some three years ago, both National and Labour politicians have moved on to suggest that the mining company is not at fault.

While the Prime Minister has said that there will be 'several inquiries' when the crisis is over, Gerry Brownlee, the Minister of Energy, has been quick to say that Pike River Coal (PRC) has 'an absolute focus on health and safety'. The emerging details do not support Brownlee's view but he is a strong proponent of increased mining in New Zealand. He has been forced had to back down on plans to mine on conservation land in the face of widespread public protests.

Labour's Damien O'Conner, another politician on friendly terms with the mining industry, has suggested that no one as to blame and that the disaster is 'just one of these things that the West Coast unfortunately has had to get used to over the years'.

In other words disasters like the one playing out right now are just a 'natural phenomena' that no-no one is responsible for. Perhaps O'Connor has forgotten that the 1967 disaster at the state-owned Strongman mine in Runanga, which killed 19 people, was caused by two breaches of safety regulations. The Government was ordered to pay compensation to the families.

Disgracefully the Engineering, Printing and Manufacturing Union (EPMU), which represents some eighty PRC employees, has gone into bat for the company's owners.

National secretary Andrew Little told the New Zealand Herald yesterday there was 'nothing unusual about Pike River or this mine that we’ve been particularly concerned about'.

He told TVNZ'x Close Up that underground mining was inherently unsafe and the risk of gas explosions, particularly on the West Coast, was high.

While the industry was aware of the risks and took the necessary precautions, unfortunately these kinds of incidents still happened, he argued.

All workers at the mining site should be seriously concerned that the EPMU has such a benevolent view of its safety standards - although that hasn't stopped Labour leader Phil Goff from praising the EPMU in Parliament.

Andrew Little's support for PRC flies in the face of the emerging expert opinion.

An Australian gas drainage engineer, who wishes to remain anonymous and who visited the site last year has said operating standards were 'extremely poor'.

The Australian expert, who still has close contacts with miners at Pike River, said he had been told the mine was flooded with methane gas about three weeks ago.

He says miners had bored through 'high flow methane holes' without any risk assessment conducted or procedure on how to manage gas flow from the hole in place.

The Australian says that PRC has not yet implemented a gas drainage drilling regime that can relieve the pressure when there is a a build up of gas by drilling a hole in the coal seam.

His comments have been backed up by a world-renowned New Zealand mining safety expert who said the explosion at Pike River should never have happened.

The New Zealand Herald has quoted Gerry Morris of Greymouth, a former writer for Coal magazine, who says he has 'heard regularly' from contractors at the mine 'over the last two or three years that this mine is unsafe, there’s far too much gas, there’s going to be a disaster here one day'.

It now appears that PRC has been under pressure to increase its revenue and extract coal faster. PRC recorded cumulative net losses after tax for the period July 2006 to June 2010 amounting to $54.1 million.

A picture is emerging of an under-pressure mining compnay that may of compromised operational safety standards in order to generate more revenue.
Posted by Steven Cowan on Tuesday, November 23, 2010