WIKILEAKS CATCHES OUT KEY AND MCCULLY 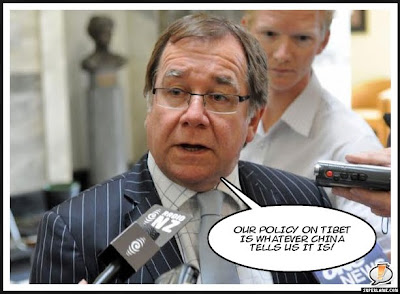 The Wikileak cables have revealed that the Government have been running two different polices on Tibet.

One policy - the real policy - has been to appease the Chinese and a cable released by Wikileaks reveals that in April last year John Key assured Chinese premier Wen Jiabao that neither he nor any of his ministers would meet the exiled Tibetan spiritual leader, the Dalai Lama when he visited the country later in the year.

But in Parliament Murray McCully, the Minister of Foreign Affairs, said that there was no boycott on meeting with the Tibetan spiritual leader.

Green MP Keith Locke asked McCully in November last year: “Is it government policy that no minister will officially meet with the Dalai Lama when he visits next month?” McCully's response was “No”. He also said he had discussed the issue with Key.

So the Government have been exposed running an 'unofficial' policy that tows the Chinese line on Tibet. It's not much of a revelation in itself but when examined in light of some of the other Wikileaks revelation, it reveals that powerful government and corporate interests exert an enormous amount of influence on New Zealand's foreign and domestic affairs. We're not the plucky independent 'battler' that the politicians insist we are.

Labour have jumped on McCully's 'deceptions', but the Labour Government of Helen Clark also played word games when it came to Tibet.

When the Chinese regime was in the process of brutally suppressing the Tibetan uprising of early 2008 Labour failed to condemn China for its actions.

It is also of interest that The Standard, the 'unofficial' mouthpiece of the Labour Party, is insisting that McCully should be held to account for misleading Parliament.

Yet barely three years ago The Standard had nothing to say about Labour's failure to condemn China's brutal military repression of the Tibetan independence movement.

So the attack on Murray McCully, however much deserved, still reeks of political opportunism.
Posted by Steven Cowan on Sunday, December 19, 2010