BOB AND THE TIME CAPSULES

Mayor Bob and the media got all excited when a metal cylinder and a bottle containing a rolled-up parchment were found beneath the plinth of a statue of Christchurch's Irish founder, John Robert Godley which toppled during the quake.

An excited Sideshow Bob told the media he believed that inside the time capsule were documents outlining the vision of the city.

'Why they came here, what was their vision.' said Bob.

How did old Sideshow know this? No one bothered to ask him.

We quickly knew where this was going - namely Bob using the documents to 'inspire' a new vision for a shattered Christchurch. A new 'founding document' no less, with Bob playing the role of Godley.

The local and global media lapped it all up and guess who was at the centre of it all - yes old orange safety jacket holding forth at yet another press conference.

Then - suddenly - the media was nowhere to be seen. Bob was abandoned, with only his 'visionary' time capsules for company.

That's because it was discovered that the words on the parchment were reported in a Nelson newspaper in 1918.

The article noted Godley's statue was moved to a northern grass plot of the cathedral grounds after spending 50 years in the centre of Cathedral Square.

And what did the parchment message say? Well, nothing about a 'vision of the city': 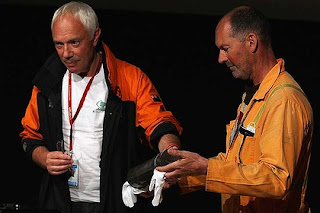 This statue of John Robert Godley, executed by Thomas Woolner, R.A., was erected in the west side of Cathedral Square by the Provincial Government of Canterbury, and unveiled by the late Sir Charles Christopher Bowen, K.C.M.G. on August 6, 1867. It was moved to this site in March, 1918.

Bob has stopped talking about the time capsules...
Posted by Steven Cowan on Friday, March 04, 2011