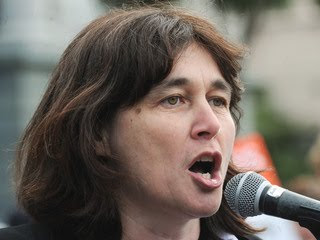 Having dismally failed to put up any significant resistance to the Government's austerity drive, the CTU and PSA want people to vote for a right wing Labour Party in November.

Its austerity policies will, and are, leading to a much diminished welfare state and further privatisation and job losses in the public sector. Such is the cynicism of the Key Government that it can demand women on the DPB to rejoin the workforce while, at the same time, add to the lengthening unemployment lines by cutting jobs in the public service.

It is also seeking to drive down further wages and working conditions while it pretends that its goal is to raise New Zealand wages to levels that compare favourably with those that can be found in Australia.

As part of the drive to suppress wage levels, Key this week signalled his intention to change labour laws and these changes certainly won't be for the benefit of workers.

He now wants bargaining agents to negotiate company employment agreements for workers rather than having a trade union do it.

As Matt McCarten has pointed out in the NZ Herald this system was brought in under a previous National Government (Jim Bolger) and resulted in workers getting screwed again.

Key also wants to reintroduce youth rates - this will be the precursor to the end of the minimum wage.

It's clear which road the National wants to drag us down and, right now, that road lies unencumbered by political protest and resistance.

The little resistance out there is coming from groups and individuals that have limited resources and influence. They have plenty of determination but lack the firepower.

In start contrast the Council of Trade Unions (CTU) and the Public Service Association (PSA) have the firepower but lack the willpower and the guts to use it. John Key knows he can get away with just about anything and neither the CTU's Helen Kelly and the PSA's Brenda Pilott will do a thing. He would face more opposition from a blancmange.

Neither the CTU or the PSA will rock Phil Goff's boat. At the Labour Party conference in May Helen Kelly confirmed that the only 'strategy' that the CTU had was to get a right wing Labour Party elected in November.

She also said 'The Labour Party has a proud record in support of economic well-being, social needs and worker rights.'

Really? Under Labour, among other things, the gap between rich and poor widened significantly. Perhaps Kelly is still grateful to Labour for giving it the Employment Relations Act which outlawed 'wildcat strikes' and kept the rank and file under the reactionary thumb of the trade union bureaucracy.

In 2009 Kelly boasted to the New Zealand Press Association that the ERA had led to all-time low levels of industrial action.

Phil Goff and the Labour Party are hostile to any form of protracted industrial action and its stance on the Government's austerity policies is ambivalent and confused, at best. Given that David Cunliffe, Labour's finance spokesperson, has already said that Labour would not shirk its 'responsibility' to make spending cuts, I am being very generous here.

Of course we also have to remember that over the past twenty years or so there has been a drop in strike levels which has been accompanied by the fat-assed do-nothing union bureaucrats basically being able to rule the roost without having to deal with a organised rank and file.

The strikes that have occurred have been short-lived, strictly legal and resulting in a 'compromise' (ie sellout) negotiated by the union officials. This is the environment that dismal union officials like Helen Kelly and Andrew Little have operated in.

If the CTU and the PSA think Labour is the solution then workers are facing some very bleak times indeed.
Posted by Steven Cowan on Sunday, June 12, 2011