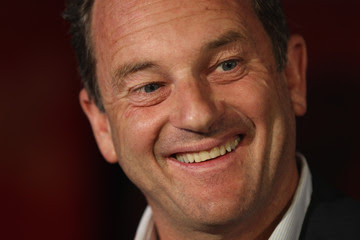 This is David Shearer. Will you be his friend on Facebook?

The leader of one of New Zealand's main political parties turned up at an explicitly political event - namely the Waitangi Day ceremonies - and proceeded to tell everyone that Waitangi Day was, in fact, 'not about politics'. Apparently he didn't see the police scuffling with protesters. He was too busy looking for the sausage sizzle.

Said Shearer : “Just one day, it’s really nice to wake up in the morning… and say ‘This is our national day, it’s so great to be a New Zealander’.'

What a load of drivel. I was under the impression that Shearer was the leader of the Labour Party, not a spin doctor for the Government.

Yes, 'it's so great to be a New Zealander' when you're out of work, under the cosh from the Government's austerity polices, unable to put enough food on the table.

Really, what the hell is wrong with Shearer? Is he on happy pills or something? He's refused to back the workers at the Port of Auckland and now he's behaving like some lame-arsed host of a TV infomercial.

Shearer's 's main contribution on Waitangi Day has been to suggest changing the honours system so that 'Waitangi Honours' are dished out instead of Queens' Birthday or New Year's honours.

It's a crucial issue. Not.

Frankly I couldn't care a toss how the establishment honours its own, but it seems to be a big deal with our Dave.

So while Shearer disappeared to Fantasy Island for some group hugs, Mana's Hone Harawira was sticking it to John Key and his flunkeys and their plan to privatise some of New Zealand's last remaining state assets.

Meanwhile Dave was enjoying the sunshine and a nice cup of tea...
Posted by Steven Cowan on Monday, February 06, 2012