Barack Obama wins four more years in the White House but the American working class will lose unless it begins to form  its own political alternative. And there is inspiration and guidance to be found in American history. By Trish Kahle.

No two historical situations are exactly the same, but sometimes the similarities are too eerie to ignore.

After a decade of right-wing reaction and working class retreat, crisis led to an explosion–but I’m not talking about the revolutionary explosion of the Arab Spring, or the occupation of the Wisconsin state capitol by union members and their allies, or Occupy Wall Street.  I’m talking about 1930.

A reporter for the New York World described March 6, a day that began with President Hoover claiming employment would rise and ended with more than 500,000 people in the streets of 25 US cities, like this: “Women struck in the face with blackjacks, boys beaten by gangs of seven and eight policemen, and an old man backed into a doorway and knocked down time after time…. One of [the women] fought savagely howling curses…. A detective ran up and while the policemen held her crashed his blackjack into her face three times before a man dragged her away.“ 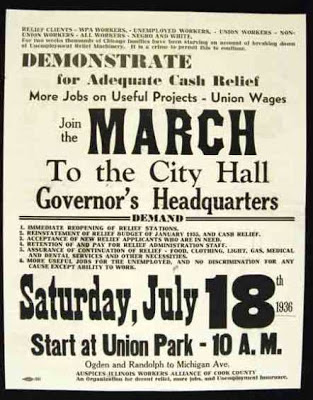 Despite the repression, the protesters were back again later that year.  This fight–the fight for basic relief and welfare services for the skyrocketing numbers of unemployed–was ultimately successful, securing $1 million in new relief funds (in today’s money, that would $14 million).  Even more importantly, however, this victory was the beginning of a larger social struggle–and it was a struggle–that led to reforms we now remember under the broad name “The New Deal.”  Of the New Deal reforms, one of the longest lasting and almost certainly the most popular is Social Security, which was passed under the SSA in 1935.

Typically, we are told that the New Deal was a reform program championed by FDR.  But this story is not only false, it obscures the lessons we can learn from the struggles of the 1930s about how to organize–and more importantly–how to win.  The Great Depression, which lasted from the stock market crash of 1929 until World War II, was a school of struggle for hundreds of thousands of members of the American working class.  As people came to understand their collective power–whether by sitting in on the floors of their factories, fighting lynching and racist court decisions, demanding price control through roaming boycotts, or organizing the unemployed as a force of potential labor and social upheaval–they learned through trial and error what worked and what didn’t.

This is to point out how fluid and dynamic the struggle that culminated in the Social Security Act was.  There was not a meeting after the October 1929 crash where workers sat down and decided to pursue such a program.  In fact, when the SSA was passed in 1935, there was still very little consensus over whether the program met the demands of the people who had fought for it, and if it were not for WWII, the social tensions that were behind the massive strike waves, anti-eviction campaigns, and sharecropper organizing could have escalated.  The organizers of the 1930s did not have the bounds on their thinking that the knowledge of the coming war imposes on us.  In fact, Social Security was part of a bigger struggle that had a broad vision for a society that put working people first, that ensured people would not starve as their farms blew into sand across the Dust Bowl.  Because of this, we cannot talk about Social Security without also talking about that larger struggle–a struggle in which many people died to ensure that the dictates of the market would not determine whether or not a person would eat.

Much like the people who formed unemployed councils in the early years of the 1930s, the American working class finds itself in a barely contained free-fall.  Living standards, which had been in decline since the 1970s, took a nose dive after the 2008 economic crash.  Around the world, poor and working people have been blamed for a crisis they didn’t cause.  And instead of making the banks and multinational corporations that caused the crisis pay for it, the ruling class–the 1%, as it were–are ramming through austerity packages around the globe, causing their profits to spike while wages, benefits, and real employment numbers continue to drop.  Now, to add insult to injury, American politicians, Democrat and Republican, have put the social welfare policies on which millions of American rely on the block to receive the budget axe.  The same policies for which women were beaten by policemen in the streets of New York, for which tenants defied eviction orders, for which unemployed people and workers were shot at by gun thugs are being stripped away.  Critically, not only will these austerity measures not fix the financial crisis, they will create a social catastrophe.

But if there’s one lesson we can learn from the struggles of the 1930s that culminated in, among other things, Social Security, the cornerstone of the too-meager American social safety net, it’s this: FDR might have signed the SSA into law, but it was the people like us–the workers, the farmers, the unemployed–who created it.

We can’t wait for a politician to save Social Security.  Let’s harbor no illusions: there is a bipartisan consensus around rolling back the SSA programs. Obama lamented to the New York Times earlier this year that the media didn’t give him enough credit for his willingness (and really, his eagerness) to place Social Security, Medicare and Medicaid on the chopping block.  As for the GOP, I’m not sure what else needs to be said.  They’re rabid with austerity.  I’m sure right now, Mitt Romney and Paul Ryan are on stage somewhere, frothing at the mouth as they scream about “entitled people” (like me, incidentally) who receive government assistance because their own income is not enough to meet their basic needs.

As I’m writing this, in the middle of election day, I know that whichever candidate wins, the people living in this country will lose unless we form our own political alternative, one steeped in the deep but too often forgotten tradition of grassroots organizing and militant unionism of this country.

This article was first published by I Can't Believe We Still Have To Protest This Shit.
Posted by Steven Cowan on Wednesday, November 07, 2012 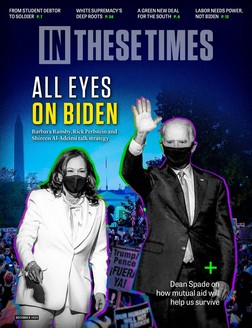