WORK UNTIL YOU'RE DEAD 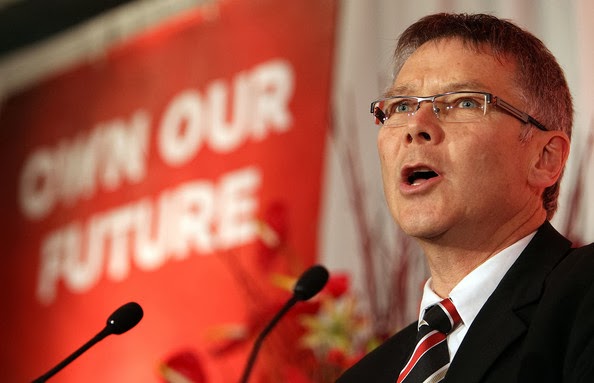 Labour's David Parker proposes to raise the retirement age to 67 - except for David Parker  and his fellow parliamentarians. The response of the CTU leadership is to say nothing because they have unbelievably already indicated they will back this exploitative policy.

This week Labour again raised the issue of raising the retirement age to 67.

David Parker won't be working until he is 67 except to take up some cushy jobs on various corporate boards, government committees, etc: '$3000 a meeting?  That'll do nicely.'

The implication of Parker's proposed scheme is that if you are in a low wage job, you won't  be able to afford to retire. You will be chained to the workplace for even longer.

While you get bossed around in a  low paid and not very pleasant job, David Parker will be planning another extensive overseas holiday.

We might have expected that the CTU leadership would have immediately condemned Parker's proposal. After all, it is presently campaigning for 'fairness at work'.

But we've heard sweet nothing from Helen Kelly and co. Why? Because they will back Parker.

That was made clear in 2011. CTU economist Peer Conway described Labour's proposal to raise the retirement age to 67 as 'bold'. It would better be described as 'exploitative'.

Conway went on  to say that: 'The increase in the qualifying age for NZ Super will be a challenging issue for unions to work through.'

Actually there's nothing 'challenging' about it - it should be simply be rejected as anti-worker. But, of course, we're  talking the CTU leadership here. They raised the white flag of surrender to neoliberalism many years ago. Union leaders like Helen Kelly have proven themselves completely incapable of organizing effective resistance to these attacks on rank-and-file workers and retirees.

But its not just the corpulent  Parker who is campaigning to exploit workers even more.

Peter Dunne  has also come up with something nasty  which  he describes as 'Flexible Superannuation'.


Workers can delay retiring until as late as 70 or, alternatively,  people can decide to take the  pension five years earlier than people can currently do so. The sting in the tail is though it will be at much lower weekly rate. Dunne's 'choice' is that you can retire poor or work until you're dead.


But according to Dunne  there are "obvious advantages" for some groups, such as those who were "physically exhausted" by age 60 because of work, Maori and Pasifika people because of generally shorter life expectancy, and those who were working beyond 65.

But as commentator Don Franks has observed:  'The only “obvious advantage” in this scenario is to the wealthier people in New Zealand, those who enjoy better health and are in the type of employment that can be carried on at a greater age. People like Peter Dunne.'

People have  a right to a decent and living pension and at age when they can enjoy it. It is scandalous that the CTU leadership are prepared to support Labour's message:

‘Work until you drop if you can't afford to retire.’
Posted by Steven Cowan on Saturday, October 12, 2013