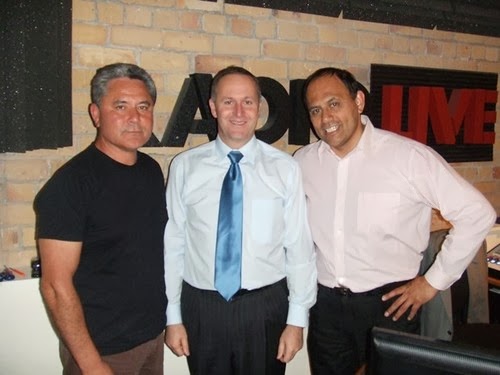 Yesterday 'Amy',  a eighteen year friend of one of the young women  raped by  a group of young men known as the 'Roast Busters', rang  Radio Live talkback hosts Willie Jackson and John Tamihere.

She wanted to talk about what she knew about the 'Roast Busters' gang, but she was instead the victim of Tamihere and Jackson's misogyny. It was shameful and offensive.

Jackson  and Tamihere blamed the girls for getting raped. They demanded to know how much the girls had had to drink and why they had been out late at night. Neither men knew  for certain that the girls had been drinking to excess  or had been out late  at night but that didn't stop them making the accusations. I'm surprised they didn't ask why they had been dressed provocatively because that's usually part of the scenario when men like Tamihere  and Jackson try to blame rape victims.

Here we had two powerful and wealthy men dumping  on the  weak and powerless.

'Amy'  rightly commented that the  Roast Busters' gang were rapists.  This was met by derision  by Jackson and Tamihere : "Well if some of the girls have consented that doesn't make them rapists, right?''

They went as far as to claim that some of the girls, some reportedly as young as thirteen  - who had supposedly engaged in 'consensual sex' - could come forward and also say they had been raped.

They even declared that the criminal activities of the Roast Busters  was simply 'mischief'.

The two talkback hosts displayed their ignorance of  the reality of rape. For them, the Roast Busters were just young lads  getting their rocks off with some 'willing' underage girls.

This  casual dismissal of sexual violence is simply reprehensible.  Rape is a weapon of humiliation, power and control. For Jackson and Tamihere to instead ask '"how free and easy are you kids these days?'' was just appalling.

The notion that these young men , who have boasted about their  activities on Facebook,  are guilty of nothing more than 'mischief' implies that the girls involved women were willing participants  in their exploitation and degradation. It is contemptuous of the emotional trauma that these girls have since endured.

Earlier this year two young American men, Trent Mays and Ma'lik Richmond, were convicted of raping an unconscious teenage girl. They drove her from party to party, raping her, assaulting her, and filming themselves doing so. Photos were also taken.  Like the 'Roast Busters'   they boasted of their activities.

And like  the Stuebenvile videos and photos, the Roast Busters  Facebook page - which has since been pulled  down - condoned, encouraged and celebrated rape. The rape and sexual humiliation of the girls was so normalised that it did  not occur to the young men involved that they were engaged in criminal and deplorable behaviour.

That Jackson and Tamihere chose to make light of this is shameful.

There has been a storm of criticism over the comments of these two arrogant men. The response of Radio Live has been to merely  pull down all the critical comments on its website.

It seems that Radio Live and MediaWorks are going to defend these two disgraceful  talkback hosts when they should be sacked immediately.
Posted by Steven Cowan on Wednesday, November 06, 2013