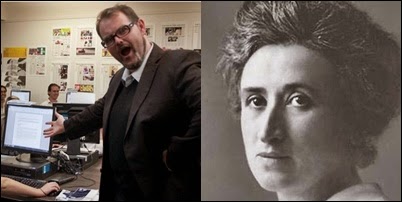 Daily Blog editor Martyn Bradbury  is well known for his cutting analysis and incisive comment but he has really excelled himself with his latest splendid observation. According to the man with all the facts, socialists are all unhappy people. The Labour Party are extremely fortunate to have such an educated supporter.

POLITICAL MERCENARY  Martyn Bradbury, last seen angling for a job with the Internet Party for no less than $8000 a month, has  been displaying  his extensive knowledge of socialist  history.

Blogging from the Mana Party AGM he commented that socialists were opposed to any deal with mega-capitalist  Kim Dotcom because we're just a bunch of miserable sods. Wrote the erudite Bradbury:

'The Socialists aren’t happy, but when was the last time in history they were happy right? '

At this point I want to hand this column over to Rosa Luxemburg.

Here is an extract  from Rosa's beautiful and moving letter:

“This is my third Christmas under lock and key, but you needn’t take it to heart. I am as tranquil and cheerful as ever. —– Last night my thoughts ran this-wise: ‘How strange it is that I am always in a sort of joyful intoxication, though without sufficient cause. Here I am lying in a dark cell upon a mattress hard as stone; the building has its usual churchyard quiet, so that one might as well be already entombed; through the window there falls across the bed a glint of light from the lamp which burns all night in front of the prison. —– I lie here alone and in silence, enveloped in the manifold black wrappings of darkness, tedium, unfreedom, and winter – and yet my heart beats with an immeasurable and incomprehensible inner joy, just as if I were moving in the brilliant sunshine across a flowery mead. And in the darkness I smile at life, as if I were the possessor of charm which would enable me to transform all that is evil and tragical into serenity and happiness. But when I search my mind for the cause of this joy, I find there is no cause, and can only laugh at myself.’

The letter concluded: “Never mind, my Sonyusha; you must be calm and happy all the same. Such is life, and we have to take it as it is, valiantly, heads erect, smiling ever – despite all.”