Mike Hosking thinks David Cunliffe has something to hide. That's the only explanation for him not appearing on Seven Sharp, right? 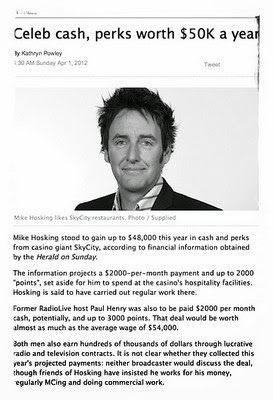 I THINK THAT Labour leader David Cunliffe   has been  the victim of a corporate media always looking for something to beat him around the head with.

Cunliffe's 'crime' has been to hand the corporate media the big stick to beat him with.

That big stick, of course, is a letter he wrote  eleven years ago to Immigration officials  requesting information about the residency application  of property developer  Donghua Liu.

Despite the media's attempt to build a mountain out of a molehill, the letter is  entirely innocent. All Cunliffe did was, in his capacity as MP for Grey Lynn, try  to assist one of his constituents. It was also four years  before Liu made a $15000 to the Labour Party - so this isn't a case of 'cash for political favours'.

Cunliffe's problem is that he previously denied he had  any involvement with Liu. It's more than likely than he just didn't remember the letter  and he has been let down by his backroom staff who failed to track it down. A fairly basic piece of research, I would of thought.

Now the media, taking its  lead from National's  description of Cunliffe  as 'tricky',  are intent on framing him as a man who is selective with the facts.

This certainly was the angle  that National Party cheerleader  Mike Hosking was plugging on Seven Sharp last night. You remember Mike Hosking, right? He's the guy who, in 2012, would not front up to the media after he was outed as having received a substantial cash + perks package  from  casino company Sky City to promote its various 'attractions' - a deal worth some $50,000.  TVNZ then subsequently banned Hosking from covering stories about Sky City.

Hosking, a man who won't talk to the media about uncomfortable issues involving himself,  was clearly irritated  that Cunliffe wouldn't appear on Seven Sharp. He made a meal  of explaining  the supposed effort that the show had made to try to get the Labour Party leader into the studio so he could be bashed on national television by John Key's greatest  fan. Hosking even challenged Cunliffe to rush in for a quick bashing before the show concluded.

This was pure theatrics  from Hosking, designed to impress upon the viewer that maybe Cunliffe had something to hide. After all, there's can no smoke without fire,eh?

So where was the missing Labour leader? He was actually 'hiding' over on TV3  being interviewed by John Campbell on Campbell Live.

While Hosking has been  banging on abut Cunliffe, his show  has had  nothing to say about this week's Oxfam NZ report  that revealed  the richest 10 per cent of New Zealanders are  now wealthier than the rest of the population combined.

This issue of  New Zealand's extreme level of income inequality and that of the rising level of  poverty are of no interest to Mike Hosking and Seven Sharp - especially in an election year.
Posted by Steven Cowan on Thursday, June 19, 2014