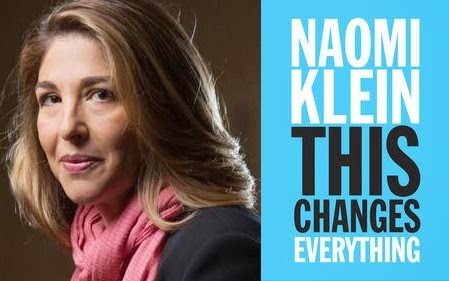 Why is the Green Party ignoring Naomi Klein and her new book?

THE GREEN PARTY MP Steffan Browning found himself in the news for the wrong reasons a  few days ago.  He rashly  signed a petition that which calls on the World Health Organisation (WHO) to "End the suffering of the Ebola crisis. Test and distribute homeopathy as quickly as possible to contain the outbreaks."

The Green Party leadership subsequently decided that Browning was not an appropriate  person to be in charge  of the natural health portfolio.

What should be of more interest to the corporate media, but will never be, is why the Green Party is ignoring  one of the most important environmental books of 2014. None of its MP's are talking or writing about it. None of its MP's have referred to it in Parliament.  The book is not being promoted on the party website.

The book is, of course, Naomi Klein's  This Changes Everything: Capitalism Versus The Climate. Since its publication in September, the Green Party has given it the old cold shoulder. Remember we are talking Naomi Klein here, the same Naomi Klein who spoke to packed houses on her 2001 tour of New Zealand. She appears to be personna non grata within the Green Party in 2014.

It's not hard to work out why the Green Party is ignoring her. It does not agree with Klein but does not have the guts to debate the issues she has raised.

Klein argues that it is  capitalism that is responsible for the growing global  ecological crisis and we need to challenge the capitalist system. In stark  contrast  Russel Norman and the Green Party have embraced the illusion that capitalism can be coaxed into being more environmentally friendly.  Norman  refers to this as his   'smart, green economy'.  See that guy over there? That's Russel Norman  trying to pat the head of the vicious pit bull which is about to bite his leg off.

This is what Norman said  shortly before the election:

"The fact is my view, and the Green Party policy, is that markets are a really good solution to the big challenges we're facing in sustainability, so that's why we're very pro the use of market forces, whereas National are into state intervention, which is the exact opposite of the predominant discourse, right?"

But as political commentator  Bryce Edwards wrote back in 2007:

"...instead of seeing environmental destruction as intrinsic to capitalism, the Greens want to see it as due just to some rogue businesses that need to be taught to recycle and adopt new technologies."

But it would be a mistake to think that it just the Green Party  that has displayed an antipathy towards Naomi Klein's views. Her book has received scant attention from the activists and bloggers who gravitate around the Labour Party as well.

In fact, time and time again, they downplay the fundamental level of change required to arrest climate change. Like Russel Norman and the Green Party there is next to no recognition that  technological  fixes and the carbon trading market are an woefully inadequate response to the ecological crisis.

Naomi Klein has said that activists need to get comfortable attacking capitalism but there is a deep rooted conservatism at the heart of the New Zealand  liberal or social democratic left (such as it is) that is resistant to such a mind shift.  It has been compromised by support for a Labour Party that has for, over three decades, been a vehicle for neoliberal policies and which remains loyal to these policies even now.

In a recent interview Klein said:

"Look at every big budget sci-fi movie in recent years: Elysium, Snowpiercer, The Hunger Games. We keep imagining this hyper-stratified, post-apocalyptic future where we’ve used up all the resources and you have a small elite of huge winners and hordes of losers. The real task is ‘Can we imagine another future?"

I think that much of  the New Zealand liberal left  cannot imagine  such a  future because it cannot imagine a country or a world not constrained  by the demands of capital. It not only lacks an  alternative vision on how to organise  the economy and society,  it thinks it merely has to tinker with  the every economic system that is destroying the planet.  The message that needs to be taken on board is that we have a world to win and a planet to save. We won't do that by thinking that capitalism is our friend - it might be a little misguided but, hey, it is still our friend. That is not only crazy talk but a view that is complicit in our own destruction.
Posted by Steven Cowan on Friday, November 07, 2014