THE CULT OF THE RIGHT 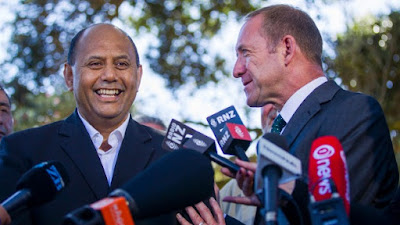 Conservative columnist Chris Trotter takes a leaf out of Tony Blair's book and insists that Andrew Little's Labour is 'broad church'. In reality though its more of a cult.

IN THE WAR AGAINST UK Labour leader Jeremy Corbyn, the Blairites have consistently claimed that Labour cannot win an election as a left wing party. The Blairites, used to running the party their way regardless of the wishes of the membership, have counselled that Labour needs to be 'broad church'. Here's Blairite Peter Mandelson writing in the Guardian last year:

"Labour is a broad church, and that seeking to impose a hard-left blueprint on the party will end up disqualifying Labour from office."

Meanwhile Jeremy Corbyn has fashioned the largest political party in western Europe. But obviously not the 'right' kind of party according to the Blairites.

Clearly conservative columnist Chris Trotter has been diligently reading his Bumper Book of Blairism, because he too is counselling is ever-decreasing number of readers that NZ Labour also needs to be 'broad church'. This, says Trotter, will widen Labour's appeal and increase its chance of winning the election in September.

Of course we can believe Trotter because he has such a successful track record when it comes to political strategy. Who can forget his splendid prediction that the Internet - Mana alliance would be a winner? Or how he supported David Shearer as Labour leader and when that didn't work out, turned to David Cunliffe as Labour's saviour?

But in 2017 he's back again for another go, and this time Andrew Little gets his 'vote of confidence', - the kiss of death I would of thought. Not so long ago he was attacking Little as a lousy union leader but, having only just recently told us that he could no longer support Labour because it was bereft of idealism and energy, he has now returned to the position that his dreary politics are most suited for - kissing Andrew Little's butt 24/7.

The problem with Trotter's tedious argument is obvious- Andrew Little's Labour is anything but 'broad church'. His is a Labour party that, together with his coterie of conservative supporters, he runs and controls. His is a party, that without any consultation with the wider membership, drops conservative non-Labour members into candidacy positions. Like Willie Jackson and Greg O'Connor.

This isn't 'broad church ' - this is  the cult of the right. And, like any cult, any challenges to the great leader are frowned upon as disruptive and disloyal. So, not surprisingly, Trotter views the principled opposition to Willie Jackson's candidacy as "demonstrating rank disunity and ideological extremism." Apparently Trotter has also been reading his Bumper Book of Stalinism.