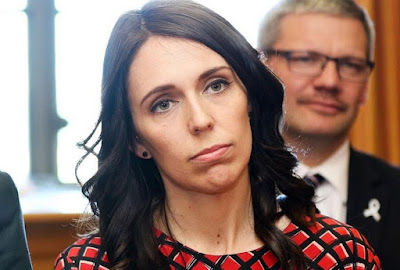 Jacindamania proved not to be the electoral winner that Labour supporters thought it would be..

THE RESULTS ARE IN and...nothing has changed.

Of course, that was always going to be the case. With both National and Labour engaged in a centrist mud wrestling match, the political and economic status quo was never under any kind of threat. When we all woke on Sunday morning we would know that the one percent would still be in charge.

And that was Labour's problem and has always been its problem. This time, up against a third term government that had seemingly run out of puff, Labour had a real opportunity to state its case for decisive change. But while leader Jacinda Ardern talked it up about 'being brave' the policies of her party said something else together. And a million Jacinda-related memes was not going to hide that fact.

So Ardern wanted to 'tackle poverty' but ruled out making the wealthy pay their fair share and ruled out increasing benefits. She said climate change was the issue of our time but ruled out banning offshore oil exploration. She said Labour would not sacrifice New Zealand to corporate interests and then said her government would negotiate a 'better' Trans Pacific Partnership agreement. She said Labour would tackle the housing crisis but only by tip-toeing softly around the interests of the market. And on it went.

Labour had no interest campaigning around a progressive manifesto  but simply wanted to out muscle National in the centre ground. It thought the photogenic Jacinda Ardern would succeed where other recent Labour leaders have failed. While she might have clawed up back some Labour support even that appears to be at the expense of the Green's.

The predicted 'youthquake' never happened. As young Auckland university students Justine Sachs and Aaliyah Zionov have written, young people are "turning away from a system that is failing to provide for even our basic necessities." Labour though positioned itself as defender of that very system.

Labour ignored the fact that, throughout the world, neoliberalism is a spent force. And bland centrist parties are so..2014. Jeremy Corbyn and UK Labour demonstrated that you can be left wing and be electorally successful. But Labour refused to acknowledge that, with Grant Robertson pouring cold water on the very idea of such policies being adopted here because they would be 'unpopular'. And Robertson's determinedly conservative policies were such winners weren't they?

I'm normally fairly dispassionate about general elections and I was actually far more excited by Jeremy Corbyn's success than anything that has happened here in recent times, but I was a little steamed up last night by the reaction of some Labour supporters to the prospect of a fourth straight term in opposition.

The view of Canterbury University political science lecturer Bronwyn Hayward seemed to be typical. She tweeted that New Zealand had been condemned to another three years of 'business as usual', blithely ignoring the fact that's exactly what Labour was offering as well. Would she had tweeted something similar if Labour had won? Probably not. The continuing misrepresentation of Labour as somehow 'progressive' or 'centre-left' or even 'left wing' isn't fooling anyone but hardcore Labour supporters. Those who continue to describe Labour in such misleading  terms are actually doing the left no favours at all.

And when I tweeted something about how we needed a progressive party that was for the many and not the few, former Labour Party candidate James Dann reacted by caricaturing me as some smarty pants left wing dick. All that Dann's comments highlighted was a seemingly permanent  hostility to a left where Labour actually should be seeking its answers. But three decades of slavish devotion to neoliberal politics will do this to a former social democratic  party in decline.

Meanwhile some Labour supporters are holding out hope of cobbling together a tawdry electoral deal with the right wing and nationalist New Zealand First. As someone once said, 'Jeez, Wayne'...