A GOTCHA! MOMENT FOR CHRIS TROTTER 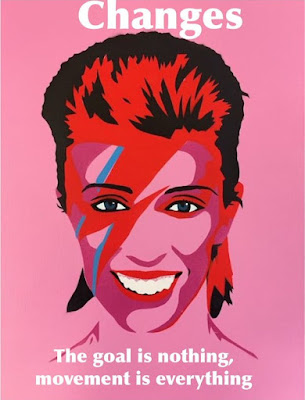 The graphic is a clever manipulation of David Bowie's Ziggy Stardust character. The picture is by Dunedin artist Sam Sharpe, who has also produced pictures of Jacinda Ardern as Princess Leia and as Wonder Woman. Do you think Sam Sharpe might be a fan of Ardern?

However it was John Moore who added the text. It is a dig at Ardern's centrist politics, although you have to know something of the socialist tradition to get the joke.

The quote, "The goal is nothing, the movement is everything" is lifted from the Eduard Bernstein's essay 'Evolutionary Socialism'. published in 1892.

Bernstein thought he knew more about capitalism  than Karl Marx. He argued that Marx was wrong about capitalism and that it had reached a level of stability that made class struggle, not the motor of history, but an anachronism. So Instead of revolutionary struggle, argued Bernstein,  the focus of the left should be on winning elections. Capitalism could be calmly and methodically reformed out of existence. There was no need for revolution. No need to storm the citadels of capitalist power - capitalism could just be quietly 'legislated' away.

Bernstein went on to say that : "What is usually termed the final goal of socialism is nothing to me, the movement is everything.” By this he meant that there was little benefit in concentrating on some final and 'abstract goal' - better to concentrate on the immediate issues in the here and now.

It was left to one of the giants of the socialist tradition, Rosa Luxemburg, to completely demolish Bernstein's argument in her essay 'Reform or Revolution', published in 1900.

She wrote that temporary and superficial changes to the economy did not constitute a fundamental break with the past and that you could not choose between reform and revolution as if you were choosing "different sausages from the buffet of history."

She stressed that the fight for reforms was not inconsequential - but they could not be arbitrarily fenced off from the socialist goal.

"Bernstein thus travels in a logical sequence from A to Z. He began by abandoning the final aim in favour of the movement. But as there can be no socialist movement without the socialist aim, he necessarily ends by renouncing the movement itself."

The validity of Rosa's argument  can be seen today in Jacinda Ardern's insistence that her government is all about 'change' but, at the same time, remains committed to the interests of 'the market'.

Over a century ago, Rosa wrote:

"Those who declare themselves in favour of the method of legislative reform in place of and in contradistinction to the conquest of political power and social revolution, do not choose a more tranquil, calmer and slower road to the same goal, but a different goal."

Someone who is excited by Sam Sharpe's work is none other than Labour Party supporter and social-democrat-travelling-rapidly-rightwards, Chris Trotter.  He thinks it can only be described as  "a brilliant piece of agit prop".

He seems to think that it represents a great piece of advertising for Bernstein's mythical "evolutionary, peaceful and parliamentary road to socialism."

But not only does Trotter not know who the artist is, he is completely unaware that the picture has been subverted by John Moore - someone who Trotter has crossed swords with in the past. This is actually a subtle sending up of Ardern's politics - not a celebration.