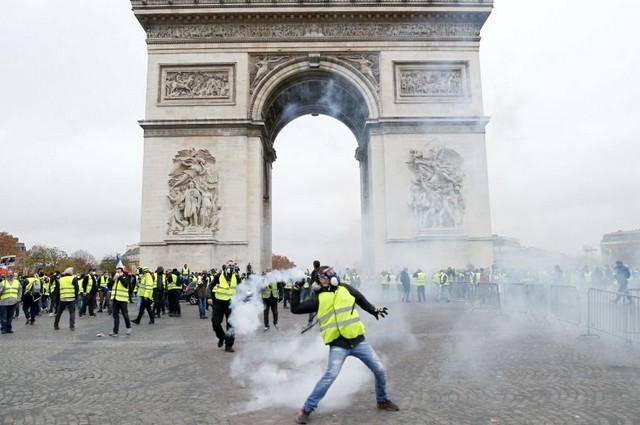 If more people than the French had a culture of resistance and knew how to fight, we might have been somewhere else than on this terribly hot planet. Andreas Malm says that if we really want to save the planet, we must pursue a different kind of climate politics, one that could learn a great deal from the methods and tactics of the gilets jaunes. 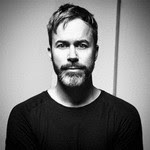 IF ANYONE needed another lesson in how not to mitigate climate change, they can thank Emmanuel Macron. Scrap taxes on the richest, then slap higher taxes on fuels: one more way of shooting oneself in the foot while claiming to be walking into a greener future. Capitalist climate governance has, of course, excelled in this kind of half-illusory, half-destructive pseudo-reforms for the past two decades. Somehow, it always makes sure any actual burdens end up on the shoulders of the poor: convert agricultural land to biofuels and drive up food prices; offset luxury emissions by growing forests in Uganda, or some other far-off place, where the farmers must first be evicted; tell ordinary consumers in Western countries that they bear the responsibility for the excess of CO2 and have to choose better (usually more expensive) alternatives; or, as the last magic bullet, plan for geoengineering schemes destined to lay millions of already vulnerable lives to waste while saving business-as-usual for some time more.

Now Macron is the last hero of capitalist climate governance. Self-styled guardian of the Paris agreement, he has cultivated an aura as the one remaining world leader who keeps his eye on the prize of lower emissions. But he is coming too late, for the kind of governance he so loves proved itself bankrupt long ago. It took the gilets jaunes to shake him out of the illusion (at least for now): one cannot combat climate change by leaving the richest even freer to accumulate capital and then dump a tax on working people to nudge them, of all classes, in the right direction. That has never worked. It never will.

Unfortunately, the illusion is still alive in the bourgeois mainstream of the environmental movement: green lobbyists assembled at COP24 greeted Macron’s decision to suspend the fuel tax with ‘dismay’. ‘If France is putting a brake on the carbon tax, it puts a brake on energy transition and sends a very bad signal’, said Pierre Cannet, head of climate and energy policy at WWF France (although it seems the organisation – mimicking Macron, as it were – later realised its mistake and sent out a press release taking a distance from the tax).

But as Maxime Combes of Attac France explains in a splendid piece, the tax would never have precipitated something like an ‘energy transition’. It would not have converted the French car fleet to cloudlessness. Its only real effect would have been felt in the wallets of the most cash-strapped consumers who cannot afford to ditch their old cars.

Nonetheless, cars must indeed urgently be taken off our roads – so how do we make sure that happens? Through, for a start, massive expansion of public transportation in urban as well as rural areas, mass diffusion of alternative modes of transportation (electrical bicycles, car pools with electrified vehicles), prohibition of fossil-fuelled private cars in cities, re-zoning of economic activities to put an end to sprawl, swift electrification of residual necessary automobility – in short: public investment and public planning on the scale and at the intensity commensurate to the climate emergency. It would help if the car industry, in France as elsewhere, were ordered to shift production to the stuff needed in this transition, much like American auto plants were converted to the churning out of tanks in World War II. 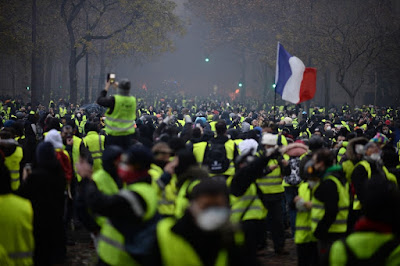 All of this would have to demand the sacrifice of neither the jobs nor the living standards of working people, but could improve both, while most certainly clipping the wings of the ultra-rich. Now Macron doesn’t exactly look like the leader who contemplates such a package when going to bed at night. The president of the rich would rather compensate for their sins by having others carry the cross until they stumble. But the time has passed when measures of this sort could even be imagined to make a difference for climate: the time is over when the capitalist class can be left in peace. Any progress towards the goal of averting utter climate breakdown now rather requires that its palaces be overrun and stormed.

AND HERE is a second, more productive lesson of the past weeks: this is how we can fight. Any progress on the climate front will happen through struggle, as in blocking traffic, walking out of schools, seizing central streets, attacking the most environmentally damaging of all forms of consumption – the conspicuous luxury orgies of the rich – and why not: burning cars. Since neither Macron nor any other leader of a capitalist state is prepared to do what has to be done, those states will have to be forced to do it, by precisely the kind of bottom-up power the yellow vests have so effectively paraded.

And there are, of course, climate movements that act in this spirit, notably Ende Gelände, which in late October sent some 6,000 activists (including a good contingent of French) towards the railway tracks that carry lignite, or brown coal, the dirtiest of fossil fuels, from the mines to the power-plants in the heartland of German industry. Here, the chimneys produce both a perpetual cloud of CO2 and handsome profits to their private owners. Not so much when the activists of Ende Gelände blocked the tracks and physically prevented the conveyance of the coal, to ratchet up the pressure on Angela Merkel – Macron’s predecessor as the guardian angel of capitalist climate governance – to close the mines once and for all. Self-organised, unlicensed by the police, dressed not in yellow but in white uniforms, Ende Gelände has not quite reached the mass depth or insurrectionary pitch of the gilets jaunes: all the more reason to learn. Conversely, one of the slogans sprayed on the walls of central Paris last Saturday read ‘the climate crisis is a war against the poor.’ But one could wish for a more pervasive climate militancy among the yellow vests. This is precisely the kind of convergence des luttes that is needed, and that looks like it might be in the cards for the upcoming fourth act.

If the convergence materialises or not, one lesson can already be inferred: if more people than the French had a culture of resistance and knew how to fight, we might have been somewhere else than on this terribly hot planet.

Andreas Malm teaches Human Ecology at Lund University, Sweden. He is the author of Fossil Capital: The Rise of Steam Power and the Roots of Global Warming. This article was first published by Verso.