A PEOPLE'S BUDGET DEBATE BUT NO PEOPLE'S PARTY 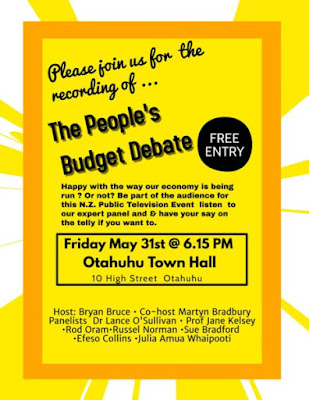 The People's Budget Debate will be held on May 31 but without political representation, its impact will be limited...

NEWS REPORTS of economic and social distress have become so commonplace that they barely raise a ripple in the mainstream media these days. So when Radio New Zealand reported this week that the Auckland City Mission have seen demand for food parcels increase by nearly 30 percent over the past year, it went largely unnoticed and uncommented on by the media generally. The fact that the Auckland City Mission issued a million food parcels over the past twelve months appears to be of less concern  to the media than the alleged misbehaviour of rugby players in South Africa.

That such widespread social deprivation occurred during the first year of a government led by a Prime Minister who supposedly committed her government to 'fighting poverty' also seems to be of little consequence. But there was Jacinda Ardern standing up in Parliament this week declaring how 'proud' she was of her government's economic record. And it was barely a fortnight ago that her government denied beneficiaries and the poor any semblance of economic security by declining to raise core benefits - even though it was one of the main recommendations of its own welfare working group.

The brief optimism of many that Ardern's talk of 'transformation' finally spelt the end for neoliberalism has just about been extinguished. Its that sense of betrayal that has probably been one of the main motivations for 'The People's Budget Debate' that will be held at the Otahuhu Town Hall Day on May 31, the day after Finance Minister Grant Robertson delivers what is bound to be a dispiriting market-driven budget.

Organised by documentary maker Bryan Bruce, there will be a wide range of speakers. It includes former Green MP's Sue Bradford and Russel Norman, Professor Jane Kelsey and economics writer Rod Oram. While the intention of the forum isn't to present an alternative economic manifesto, it will allow the airing of alternative views and ideas to the failed neoliberal status quo.

While this is a positive step, the ugly fact remains that anything achieved at the debate has little prospect of going any further without political representation. But Parliament is the preserve of political parties loyal to the neoliberal status quo and there are no Alexandria Ocasio-Cortez's or Jeremy Corbyn's sitting in either Labour or the Green's prepared to take up the concerns of 'The People's Budget'.

One of the scheduled speakers, Sue Bradford, wrote this month that any kind of transformative change will have to be championed by a political party not yet in Parliament. I couldn't agree more and perhaps we will reach a time that a conference will be held to launch such a party.

Bearing this in mind its frustrating that one of the co-hosts of The People's Budget Debate, Martyn Bradbury of The Daily Blog, is still peddling the old 'lesser evil' argument about the present government. He recently wrote:

"Despite the overwhelming meaninglessness of this unprepared Government, Labour + Greens + NZFirst are lights years more preferable than a Judith Collins led National Party returned to power with a fanatical religious zealot holding power."

We need to call out this argument as the destructive nonsense that it is. Beneficiaries and the poor who have been denied any escape from economic penury will not appreciate being told by middle class activists like Bradbury that this government is 'the lesser evil'. It is astonishing that Bradbury should even raise this discredited argument but it does go to prove that his opposition to the Labour-led government is, at best, ambivalent. It is time that people like Martyn Bradbury, and others like him, decide whose side they are on. Protesting this government's economic policies while still calling for its re-election simply isn't good enough.