WHY IS MARAMA DAVIDSON IN PARLIAMENT? 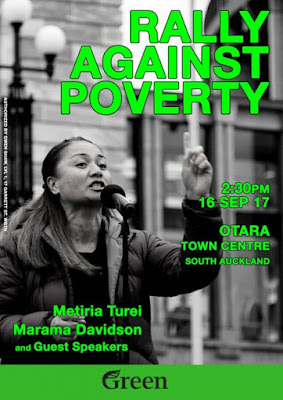 Despite her claims to a 'radical politics',  Green Party co-leader Marama Davidson has proven to be yet  another routine establishment politician  betraying the interests of the very people she claims to represent.

WHAT IS the point of Marama Davidson being in Parliament? I asked that question to myself after watching the Green Party co-leader stand alongside the Minister for Social Development and Disability as Carmel Sepuloni  delivered her Government's terrible response to the Welfare Expert Advisory Group's recommendations.

The over 40 recommendations have mostly been sidelined by the Labour-led Government. It has only been prepared to implement three of them which provoked former Green MP Sue Bradford to describe the government's response as 'virtually useless'.

The Government's decision not to take up the advisory group's recommendation that core benefits should be raised substantially and should be raised now has effectively consigned tens of thousands of New Zealanders, after nine long years of austerity, to further economic hardship and distress. Hardship grants (now at record numbers) and temporary winter power payments will do little to alleviate the hardship. We've been shafted again.

Watching Marama Davidson blandly smiling as Sepuloni denied beneficiaries and the poor a better and more secure future reminded me that in 2017 Davidson was making speeches at South Auckland rallies, lambasting the National Government's failure to address growing poverty and inequality.

All that passion has faded away to bland smiles and empty words trotted out about how she knows about the hardship that many people are enduring and that she will continue to work hard for them. She has even attempted to throw some glitter on the turd by tweeting that the Green's were instrumental in having the sanctions removed against sole parents because its Confidence and Supply Agreement with Labour pledged it to removing 'excessive sanctions'.

There will be some, mostly Davidson's supporters, who will say that I am being unfair singling her out. They will argue that she is just following orders. But the problem is that Davidson arrived in Parliament trumpeting her radical credentials. Indeed it was her so-called 'progressive politics' that saw her voted Green co-leader ahead of the more conservative Julie Ann Genter.

Last year she told Spin Off that she represented Green supporters "who are trying to overturn the way we run government and politics. " Defending her radical label she also declared:

“What I do find radical is an economic system where the City Mission is full, but two men have more wealth than the bottom 30% of the country. So if that’s what I’m going to be labelled with because of the visions of life we can all have here, then I’m fine with that.”

But her 'radicalism', if it was ever there in the first place, has gone missing in the impenetrable
centrist fog that now clings to the Green Party like a wet blanket. She displays exactly the same kind of reverence for 'politics as usual' centrist politics displayed by the Labour-led government and her fellow Green MP's. She shows a willingness to believe anything that Jacinda Ardern tells her while dismissing the views of the increasing number of folk disenchanted with the Labour Party and the political process generally.

We face massive systemic problems and fixing them requires massive systemic change, yet Marama Davidson,  'the progressive voice' of the Green Party, sounds and acts like any other establishment politician defending the status quo and letting us all down.
Posted by Steven Cowan on Sunday, May 05, 2019