JACINDA ARDERN ON CLIMATE CHANGE : IN A GLASSHOUSE, THROWING STONES 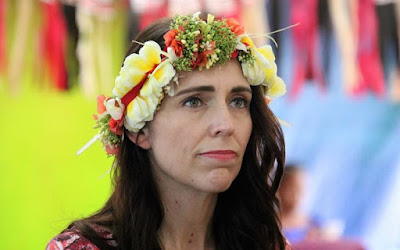 Prime Minister Jacinda Ardern claims that her government is doing all it can to fight climate change. It isn't. And we'll all pay the price for its inaction.

ITS A PITY THAT Australian shock jock Alan Jones' intemperate attack on Prime Minister Jacinda Ardern has obscured the fact that Ardern is a political leader living in a glasshouse and that she really shouldn't throw stones, especially on the issue of climate change.

Saint Jacinda has developed the nasty and annoying habit of delivering empty sermons from her pulpit and her comment that 'Australia has to answer to the Pacific' on climate change and then proceed to claim that New Zealand is doing all it can to combat carbon emissions and expects other nations to do the same, smacks again of Ardern's propensity of expecting people to do what she says, not what she does.

The truth is that Jacinda Ardern and her Labour-led government are not doing all they can to fight climate change. Far from it. While Ardern acknowledges this is a crisis we're facing, its not such a crisis that New Zealand can't meander to supposed carbon neutrality by 2050. We're apparently just going to disregard the warning that we have less than twelve years to effectively combat climate change. Or we're toast.

The days are long past for the slow, incremental measures that Ardern favours. Piecemeal measures are no longer an option but she behaves as if they are. She leads a government that claims that capitalism, which is actually the source of our problems, is actually the solution. This is  not only dangerous nonsense but dangerous nonsense being played out right now by the Labour-led Government with the able assistance of the Green Party. And we're the losers.

Jacinda Ardern might have some moral authority to lecture others on climate change if New Zealand was pursuing a Green New Deal, but we're not. Instead of pursuing a radical ecological and economic transformation of our current system, Ardern is advising the corporate sector on how it can maintain its profit margins. The favoured audiences of Climate Change Minister James Shaw are those drawn from the corporate sector.

Instead of rejecting the economic orthodoxy to fight climate change, Ardern's government continues to embrace it in some kind of ghastly dance to the death.

Unfortunately Jacinda Ardern, a routinely centrist politician who fears rocking the boat, is exactly the wrong kind of political leader we need right now. She behaves as if this is 'just the way things are' and merely tinkers when a complete overhaul is required. Hers is piecemeal progress and limited progress at that.

She adds insult to injury when she suggests to the rest of the world that New Zealand is a shining light in the fight against climate change. We're not and no amount of PR puffery from the Prime Minister can change that fact.
Posted by Steven Cowan on Friday, August 16, 2019