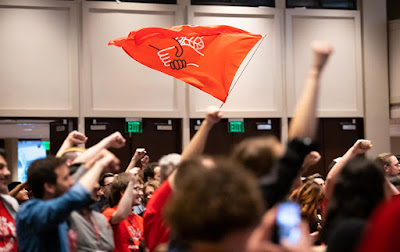 While New Zealand politics remains strangled in a neoliberal straitjacket, the Democratic Socialists of America held its annual convention last weekend at a time when the interest in socialism has never been higher in America.

THE DEMOCRATIC SOCIALISTS OF AMERICA (DSA) held their annual convention in Atlanta last weekend. It came at a time when all recent polls have underlined that more and more Americans, especially young Americans, are disillusioned with capitalism and more open to the ideas and goals of socialism than at any other time in recent history. The rise of someone like Alexandria Ocasio-Cortez, a DSA member and generally regarded as the public face of the American left, has done much to popularise socialism in a country where the political establishment has, historically, done its best to keep socialism out of the national discourse. Now Ocasio-Cortez is discussing socialism on The Stephen Colbert Show and Donald Trump is vowing that America will never become a socialist country.

So this was an important convention for the DSA. With over 100,000 members and a party infrastructure firmly in place, it needed to ensure that this convention confirmed and built on the gains already achieved. It seems to have done that and its testament to the DSA's growing national prominence that Fox News felt obliged to sneer at the convention on a regular basis. But even the Wall Street Journal, a perennial enemy of the DSA, was moved to comment: 'The Democratic Socialists of America are hard to take seriously. But don't write them off.'

For those who despair at the conservatism and timidity of much of what constitutes 'left wing' politics in New Zealand, there's a lot to like about the DSA. Some of us could well be wondering why we can't have some of what DSA members are having.

The national convention passed a number of important resolutions including expanding the fight for immigrant rights and for public housing. It also, interestingly, approved a plan to implement a nationwide socialist education programme and provide both staff and material resources.

Against the backdrop of the climate change crisis that is rapidly descending upon us all, the DSA reaffirmed its commitment to the Green New Deal. The GND,  which is being promoted by Ocasio-Cortez and others , recognises that the fight against climate change is inextricably linked with the fight against capitalism. Its approach and philosophy is in complete contrast to the New Zealand Green Party's disastrous corporate-friendly environmentalism that seeks merely to tinker with the levers of the very machine that is chewing up the planet.

The convention passed a resolution that supports the plan to “decarbonise all sectors of the US economy by 2030; democratise control of major energy systems and resources through public ownership and centre the working class in a just transition to a caring economy with a job guarantee that expands the public sector.”

The DSA's long term aim remains the same; to strike out as independent and socialist party. It reaffirmed that goal in a resolution that, in part,reads:

In New Zealand we can only look enviously at the progress that the American left is making while we're being invited to vote for another dose of neoliberalism via Labour and the Green's. Er, no thanks...