A PRIME MINISTER OF STASIS 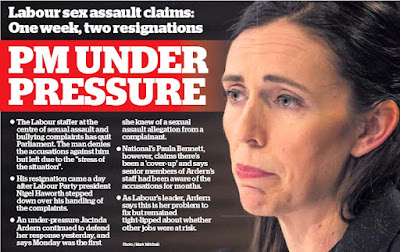 The fact that many Labour supporters are presently having a crisis of belief over Jacinda Ardern for what are only alleged failures only goes to underline their complacency over her obvious failure to be a leader of 'transformation'.

Definition : Stasis is a state in which something remains the same, and does not change or develop.

AT THE HEIGHT of what become known as 'Jacindamania', a handful of us warned that boosting Jacinda Ardern as the great progressive saviour was woefully misguided. None of us, I think, considered our warning to be a particularly remarkable political insight. After all, even a cursory survey of Ardern's nine year parliamentary career reveals nothing more than a routinely centrist politician.

But this was very much a minority view that largely went unheard by those who were more than keen to accept Ardern on face value and saw her as the woman to lead a newly invigorated Labour Party not only to election victory but who would initiate the great progressive 'counter revolution'. Even those who were realistic and rational enough to know that Ardern would not deliver on her campaign promises allowed realpoliik to prevail. The argument, monotonously promoted for the past three decades, is that at least any government led by Labour is preferable to one led by National. But one of the many problems with 'lesser evilism' is that you never actually get anything close to the government you want.

And so it with this Labour-led government. Ardern, who told us 'capitalism has failed' has presided over a country where the rich grew richer by a record $90 billion over the past year. In stark contrast, those of us in the lower half of the income spectrum, actually had an additional $1.6 billion extracted from our pockets over roughly the same period of time. Yet Ardern, who promised 'transformation', has declined to implement a capital gains tax while rejecting her own welfare working group's policy advice that benefit levels should be increased immediately in order to tackle widespread 'economic distress'. It really has been 'socialism for the rich and capitalism for the rest of us'.

She's also the same Jacinda Ardern who has allowed the bumptious Finance Minister Grant Robertson to maintain the austerity regime of the previous National led government, with spending capped at 20 percent of GDP. Its worth noting that  economist Michael Reddell has calculated that this Labour-led government is actually spending less on education and health than National were under Bill English.

And while Ardern declared during her election campaign that climate change was the issue of her generation, her government has only been prepared to tinker when sweeping changes are required if we are to avoid environmental disaster. For Ardern to base her government's climate change policies on carbon neutrality by 2050 when we have already been warned we have little more than twelve years to get our act together, simply isn't good enough and a betrayal of our children's interests. While in the United States the charge is on for a Green New Deal, the Climate Change Minister in this country continues to peddle the poisonous fantasy of a environmentally friendly capitalism.

Jacinda Ardern and her government stand condemned for failing to deliver on its election campaign pledges and for maintaining what business commentator Bernard Hickey has described as 'the tyranny of the status quo'. Yet Labour Party supporters, especially, have continued to support this government regardless. It doesn't matter what promise Ardern breaks, her image as the nation's 'progressive saviour' has remained largely unsullied, boosted on the international stage in the aftermath of the Christchurch terrorist attack.

Somewhat ironically Ardern has never been more vulnerable than she is today, but its unclear whether she's actually at fault. Her natural instinct is to lean into the status quo so its not surprising that she expected her highly paid Labour Party bureaucrats to handle the allegations of sexual harassment and assault with both professionalism and sensitivity. That they didn't hardly seems to be Ardern's fault.

She also claims that she was unaware of the serious sexual nature of the complaints because no one told her. There's no evidence to suggest, so far at least, that's she not telling the truth. However many Labour Party supporters appear to be having difficulty believing her. Her credibility has been stretched to breaking point and suddenly Saint Jacinda is seen to have feet of clay.

The report into the whole affair isn't due for three weeks or so which has led Labour Party-friendly Ali Mau to claim that Ardern's 'credentials at home and abroad as a new kind of leader – kind, caring, compassionate and honest – all hang on her next move.'  Well, maybe, but only if you think Ardern is indeed 'a new kind of leader' . And, in the light of what she has said in the past, Mau obviously thinks she is. She couldn't resist telling Guardian readers that some of the women who have lodged complaints view Ardern as 'inspirational'.

But if Ardern truly was 'a new kind of leader' she would be leading a government that was implementing sweeping economic and political change instead of accommodating her government's policies to the interests and concerns of the status quo. There's nothing 'new' about that. There's also nothing 'kind, caring, compassionate and honest' about a leader whose government continues to pursue austerity policies while the queues at the food banks continue to lengthen. There's nothing 'inspirational' about this either.

The fact that many Labour supporters are presently having a crisis of belief over Jacinda Ardern for what are only alleged failures only goes to underline their complacency over her obvious failure to be a leader of 'transformation'. That she stands condemned as leading a government of stasis seems to untrouble the consciences of far too many middle class Labour Party supporters. But, I guess, they have not had to experience standing in line at Work and Income at two in the morning or find themselves having to use a food bank in order to put food on the table.