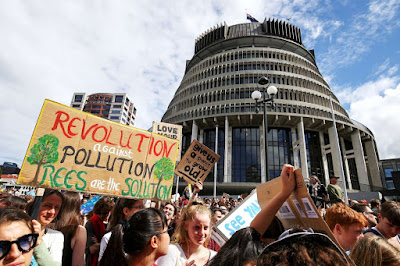 The fight for meaningful action on climate change means confronting and overcoming the dangerous centrism and incremental reformism that lie at the heart of the Labour-led government.

WITH AN ESTIMATED 170,000 PEOPLE having attended the Climate Strike on Friday, its size dwarfed that of the previous two strikes which were attended by some 20,000 folk each. New Zealanders joined the over six million people globally who demonstrated during the week of climate change action.

The problem is that while the calls for radical and urgent action are growing louder, the Labour-led government continues to show little interest in deviating from the disastrous centrist and corporate friendly path it is dragging the country down. When the demonstrations on Friday demanded urgent action, all this Labour-led government has to offer is slow incremental reforms supposedly leading to zero carbon emissions in 2050.

in the United States, and now Britain, the push is on a for a Green New Deal. The importance of the GND is that it has moved the discussion away from merely about how the economy can be managed but how it can be changed. There is a growing recognition that the conversation must be about a different kind of economy and how that economy can be brought about.

That conversation has yet to begin here. While pressuring centrist politicians like Jacinda Ardern and James Shaw is fine as far as it goes, we should be under no illusions that they are going to provide the policy solutions that we might want. They have an entirely different agenda altogether, one that believes that market mechanisms can be employed to effectively fight climate change.

While Climate Change minister James Shaw has posed as an ally and friend of the climate strike, and even went as far as to express his solidarity with Greta Thunberg, he is opposed to anything even approaching a Green New Deal for New Zealand. He continues to think that 'green capitalism', the business sector and the market are the best way to respond to the climate crisis. So while we perhaps have, at best, twelve years to effectively combat climate change, Shaw continues to peddle the target of zero carbon emissions by 2050.

James Shaw thinks that , green' products and services, increased 'eco-efficiency, and the ingenuity and technological mastery of business entrepreneurship will save us from catastrophe. James Shaw is out there telling the corporate sector about the new trading opportunities offered by climate change. This narrative, the idea that corporate initiatives are enough, fits well within the framework of neoliberalism. It suggests that there are no alternatives to the 'free' market.

We need to recognise that the fight for meaningful action on climate change also means confronting the extremism of centrism and incremental reformism that lie at the heart of this Labour-led government. It doesn't get a free pass because it is supposedly the 'lesser evil' because in the fight against climate change, there can be no 'lesser evil'.