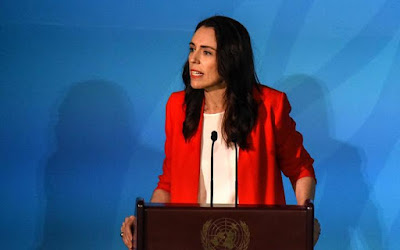 While Greta Thunberg admonished the political establishment for failing to act on the existential threat posed by climate change, Prime Minister Jacinda Ardern could only talk of 'the perfect trading opportunity' offered by environmental catastrophe.

SIXTEEN YEAR OLD Greta Thunberg stole the show at the United Nations Climate Change Summit. She delivered an impassioned speech that condemned the politicians for their continued obsession with endless economic growth and insatiable lust for profit, even while the planet burns.

'People are suffering. People are dying. Entire ecosystems are collapsing. We are at the beginning of a mass extinction and all you can talk about is money and fairytales of eternal economic growth," she said. "How dare you!'

Her message though largely fell on deaf ears, her audience dominated by politicians who are little more than representatives of corporate interests and who, in many cases, contribute to their election campaign funds. While the obvious villains are the likes of Donald Trump and his cabal of climate change deniers, centrist politicians like Prime Minister Jacinda Ardern must take their share of the blame as well.

When the need for radical change, for 'system change not climate change' has never been greater, Ardern could only talk of New Zealand targeting carbon neutrality by 2050. She continues to disregard that we have nothing like thirty years to get our act together.

Ardern chose to stick her fingers in her ears and not take on board Greta Thunberg's warning. Why? She told the United Nations summit that if we fully confront the consequences of climate change people will 'lose hope'.

'... if we only talk about the loss of glacier mass or sea level rises we run the risk of a society that believes all is lost and that it is simply too late it is not.'

Of course it is not too late. It is not too late  if we make the radical changes that are demanded. A burgeoning youth movement, represented by people like Greta, recognise this. But Jacinda Ardern and her Labour-led government don't. It will be too late if we continue down the corporate-friendly path that Ardern is intent on dragging us all down. We are sleepwalking to disaster.

And while Greta condemned the twin motors of capitalism, ceaseless growth and even more profit, that threaten to drive the planet off the cliff, Ardern could only speak of the 'perfect trading opportunities' offered by climate change. It is the same message, motivated by the poisonous ideology of 'green capitalism', that Ardern and her Climate Change minister, James Shaw, have been peddling around the country ever since they took office.