SOCIALISM FOR THE RICH AGAIN 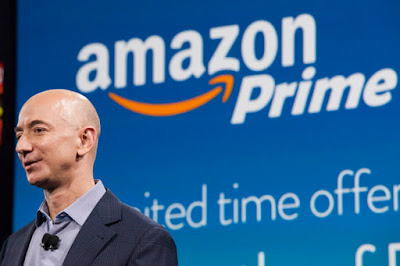 New Zealanders will be coughing up as much as $400 million in order that the richest man in the world, Jeff Bezos, can make a load of cash out of a rebooted Lord of the Rings.

YOU JUST HAVE to throw the mainstream media an ostensibly attractive bone and it will almost certainly go bounding after it. In this case its the news that Amazon have chosen Auckland as its production base for a re-imagined Lord of the Rings. It has to be  're-imagined' because the estate of author JRR Tolkien have denied Amazon permission to use the book's plot.

The story was one of the main items on both six o'clock news bulletins with the emphasis heavily on the fact that this will reportedly be the most expensive television series yet made, with a budget approaching $1.5 billion.

The Government has chimed in with the good news stories. Phil Twyford, the economic development minister, has described the 'ambitious production' as 'fantastic news' for New Zealand. There would, he said, be 'significant investment' in the local economy and it would create jobs. There was also the usual spin about the television series being a boost for tourism.

Somewhere down at the bottom of the various news stories though was the fact that Amazon, despite being the world's biggest multinational with a market value of $797 billion, will be eligible for a handout from the New Zealand taxpayer. Although it might be planning to spend $1.5 billion on the television series it will get up to about a quarter of that back in the way of a film subsidy rebate from the Government. That's probably going to end up costing the taxpayer as much as $400 million.

As a way of contrast the Government announced earlier this month just $60 million worth of additional funding for PHARMAC spread over two years. Cancer patients and treatment advocates have described this as just 'a drop in the ocean'.

The question is, what's so special about Amazon that it requires over  a quarter of a billion dollars to make its television series here?

The immediate response of those who will directly benefit from the television series is that if the government didn't cough up the cash Amazon would take the production elsewhere. But the two main reasons why the producers want to make the series here is because their first location choice, Scotland, fell over because of worries over Brexit and secondly because they want to take advantage of New Zealand's scenery. Neither of these two reasons requires the taxpayer to hand over $400 million to Amazon owner Jeff Bezos - who makes more money in 12 seconds than his lowest-paid employees make in a year. 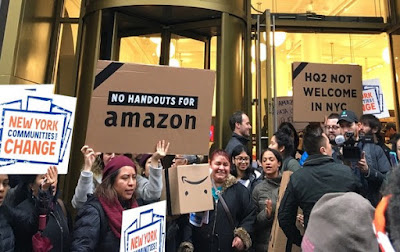 The reality about corporate welfare like this is that its really not about job creation or economic development but political considerations. While  it gives Phil Twyford the opportunity to crow about the jobs that will be created (albeit temporary jobs) this is actually  not about creating jobs but buying them.

The biggest multinational in the world doesn't require a tax break. This is the same multinational that has not paid any tax in the United States for the past two years but has received over two billion dollars in tax incentives. Meanwhile, many of its employees have to resort to food stamps in order to get by.

It is yet another indictment of this Labour-led government that it is prepared to waste taxpayers money on a television series like this rather than spending the money in such underfunded areas as welfare and health.

Companies like Amazon are all seeking a viable series to replicate the commercial success of Game of Thrones. Amazon clearly think they might have a winner in a rebooted Lord of the Rings. It will be hoping that it will generate something close to the over two billion dollars worth of profit that Game of Thrones generated. The Labour-led Government should not be helping Amazon achieve that goal by providing the economic framework that allows Amazon to socialise the risk but privatise the profit.