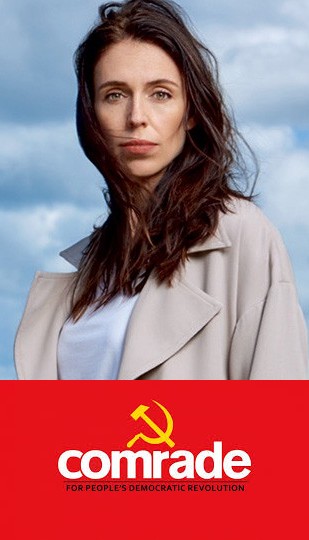 The coronavirus related spend-up by the Labour-led Government has got the right frothing at the mouth. Apparently it is yet more irrefutable evidence that Jacinda Ardern is a socialist, intent on socialising the capitalist means of production at the first opportunity.

A CURIOUS by-product of the Labour-led Government's attempt to shore up the free market economy are accusations from the conservative right that this is communism by stealth. Such has been the overwhelming dominance of neoliberalism for the past three decades that any government intervention in the economy, however mild, is regarded as a full blown assault on the citadels of capitalism itself.

This has led to all kinds of madness in the social media - and on talkback radio - where a mild centrist politician like Jacinda Ardern is regularly depicted as a follower of Karl Marx. 'Comrade Ardern' is apparently going to socialise the means of production all by herself. This would certainly upend everything we know about socialist revolution. Was Eduard Bernstein actually right? Did Rosa Luxemburg get it completely wrong?

While we might laugh at  a farmer who holds up a placard that says 'She's a pretty communist', some rather more intellectually capable people have seriously tried to portray Jacinda Ardern as an existential threat to the capitalist order.

In a recent opinion piece headlined 'It's important to understand what drives the prime minister', Steve Elers suggests that irrefutable evidence of Ardern's socialist beliefs can be located in 2008 when she was elected president of the International Union of Socialist Youth (ISUY).  Elers, who is a senior lecturer at Massey University’s School of Communication, Journalism and Marketing, writes:

'...In early 2009, just two months after becoming an MP, Ardern presided over the union's World Council annual meeting in her capacity as president.

Official records of that meeting give us insights into Ardern’s political ideology. For example, the meeting documents state the aim of the union is to 'defend and spread our core socialist principles'.

But while Elers might really want Ardern to be part of the 'world wide communist conspiracy', the ISUY is little more than a staging post for young social democratic politicians (and I use the term 'social democratic' loosely) motivated by career ambitions to become leaders in their various social democratic parties. Former British Prime Minister Tony Blair, a man who effectively destroyed UK Labour as a traditional social democratic party, is also a former ISUY president. Ardern was, of course, a former policy advisor in Blair's office.

By 2008 the ISUY had adopted 'third way' politics supposedly designed to 'modernise' social democracy. What it meant in practise was an acceptance of the basic tenets of neoliberalism with the state supposedly designed to provide assistance for the casualties of the 'free market'. But as former Labour leader Jeremy Corbyn observed of Tony Blair '...he promoted and encouraged the privatisation, deregulation and the marketisation of the welfare state, and he made no progress towards the redistribution of wealth.'

As Corbyn's comments highlight, the socialist left was an implacable enemy of 'third wayism'. It argued that neoliberalism and social concerns could not be reconciled. While third way politics as a movement is largely defunct now, its influence remains under the guise of 'centrism'. And it is centrist politics that Jacinda Ardern remains faithful to now.

But seemingly not one to allow the facts to get in the way of his 'Ardern is a nasty socialist' narrative, Elers plays his trump card. He tubthumps that Ardern used the term 'comrade' fifteen times in 'just seven minutes' at the 2009 annual meeting of the ISUY World Council . Elers informs us:

'The definition of 'comrade' from An Encyclopedic Dictionary of Marxism, Socialism and Communism is as follows: “Originally, one who shares the same chamber. The term has been adopted by socialists and communists for party members.'

It is true that the term 'comrade' is associated with the socialist movement. It was actually adopted in the mid-19th century as an egalitarian alternative to terms like 'mister' or 'miss' and was popularised during the European revolutions of 1848. However the term is not exclusive to the socialist movement and it is often employed by people who are patently not socialist but like to give the impression that they are - or at least sympathetic to the socialist cause.

In my experience there are many people who like to use the term comrade but are also determinedly anti-socialist. Indeed, I'm looking at a blog post from such a person right now. He's advising people to vote for Jacinda Ardern and the Labour Party this year. No doubt Steve Elers would insist that he's part of the 'worldwide communist conspiracy' too.

In a recent letter published in The Press Tom Roud of the Canterbury Socialist Society makes similar points to my own. He comments that the right wing have misinterpreted the recent coronavirus-expenditure as socialism in action and concludes that 'Labour is merely behaving the way very ruling party does is an election year. It is not offering socialism, and its a damn shame too.'

A well judged and accurate observation from Comrade Roud.