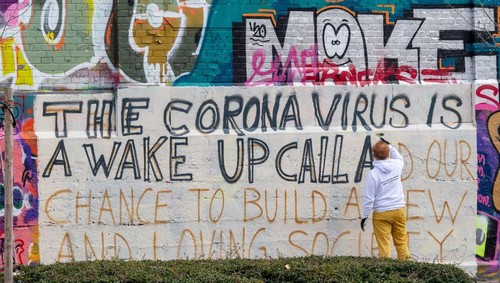 The coronavirus induced  economic crisis could be used to build a very different economy and society. Instead, the Labour-led Government is trying to revive the corpse of neoliberalism.

ONE OF MY TWITTER comrades has observed that the Minister of Finance's 'shovel readiness' doesn't include a desire to bury neoliberalism. Liquid Times comments that : 'There's one shovel ready project Grant Robertson's not interested in: neoliberalism's grave.'

This is true. Grant Robertson's idea of 'returning to normal' is premeditated on restoring the primacy of 'the market' and with all the inevitable inequalities and injustices that will stem from that. This is the political project of the Labour-led Government.

So it was interesting to hear Deputy Prime Minister Winston Peters say on Q+A last night that 'ideology' had to be parked outside the door in our efforts to rebuild a shattered economy. He was, I think, making a pitch for economic nationalism but he was also suggesting that everything was up for grabs and all ideas and policies would be considered. He didn't say that 'we're all in this together' but he might as well have done.

But you only have to read and listen to the debates occurring now within the political mainstream to know that everything is based on what's best for 'the market' and there's little consideration being given to building an economy and society that doesn't protect the interests of the one percent. That the Labour-led Government's agenda is somehow beyond 'ideology' is self-interested nonsense when we know that the economic impact of this crisis, and, in particular, the distribution of costs, could not be more political.

While comparisons are being made to the 2008 financial crash this economic shock - and what might translate into a full blown depression - has been caused by a virus attacking the fragility of an economic system that has been evident for years but has been ignored by the 'movers and shakers', seemingly bedazzled by rising stock prices. But, displaying zero embarrassment and contriteness, these very same talking heads are in the media now, pontificating about what we need to do next.

After a decade of slow growth, surging debt levels and rising inequality, the world has rarely been worse prepared for what is to come. But if insanity, as Albert Einstein defined it, is 'doing the same thing over and over again and expecting different results', the lunatics have certainly taken over the asylum.

As writer and activist Naomi Klein has noted : 'This crisis — and not only the pandemic but the economic crisis that has been set off and that we’re still in the grips of, the crashed oil prices and the political crisis, all of it — is laying bare the extreme injustices and inequalities of our economic and social system.' But in New Zealand, as elsewhere, the goal is to rebuild this very same rapanacious and poisonous economic system. This is the reality of Prime Minister Jacinda Arden's air-brushed 'kindness'. Only someone ill-prepared to fight the political battles to come, could actually continue to extol the virtues of Jacinda Ardern merely on the basis that she isn't Simon Bridges.

This crisis could be used to create a very different economy and society and, indeed, many individuals and groups have been offering up their ideas, policies, and proposals for wider consideration. They might often differ in detail but they share a common desire to bury a neoliberalism that has plagued us for over thirty years. In stark contrast, this Labour-led Government, representing the interests of the economic and political elite, is intent on trying to revive the corpse.