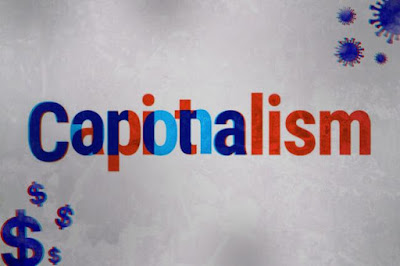 The team of 4,950,000 should  pull down the damaged and failed neoliberal economy and start again, not help rebuild it.

PRIME MINISTER Jacinda Ardern and/or her backroom staff like slogans and catchphrases. At times it often sounds as if Ardern's not fronting a government but an advertising campaign. Indeed Labour's 2017 election campaign slogan, 'Let's Do This', reportedly Ardern's invention, was obviously inspired by Nike's well known 'Just Do It' slogan.

Since then we've had 'We're In This Together' and Jacinda Ardern has monotonously stamped the buzzword 'kind' - and variations of - over pretty much every government campaign. While Dr Spock might have declared that we 'Live Long and Prosper' accompanied with the Vulcan hand-sign, Ardern has been more than capable of the swift hug. Of course in the post-pandemic era it'll have to be 'kindness' sans hugs.

Of course slogans like this soon fall into disrepute especially when they bear very little relationship to reality. So when Ardern declared she wanted us to do 'this', she wanted us to know that she had every intention of really tackling her two main priorities, poverty and climate change. However she had barely become Prime Minister when she was announcing that no government she led would ever introduce a capital gains tax. And 'seriously' addressing climate change, as if it was her 'nuclear free moment' , actually turned out to be targeting carbon neutrality, without upsetting 'the market', by 2050. Which is about twenty years too late.

I've heard mainstream journalists describe Ardern as the 'Queen of Kindness', and not always ironically either. Sometimes it has sounded almost reverential. But this 'Queen of Kindness' leads a government that refuses to increase benefit levels even though the country is plunging into the economic mire and the queues at the food banks continue to lengthen by the day. Maybe Ardern thinks you have to be cruel to be kind.

The latest slogan to emerge from the Prime Minister's office has been 'team of five million'. Conceived to suggest that the entire country was in a war to defeat coronavirus, it was meant to encourage folk to abide by the rules and stay confined to home while we rode out, at least we hope we have, the worst of the virus.

A week or so Ardern thanked her 'team of five million' for remaining 'resolute and determined' but since then the phrase has turned up in government declarations about how we are rebuilding the shattered economy 'together'. If it was just another meaningless phrase like 'going forward', 'shovel ready' and 'achieving clarity' then we could just be briefly annoyed about it and then move on. A little like what some of us experienced when we read a Chris Trotter blog post declaring that Grant Robertson is returning Labour to its social democratic 'home'.

But behind this phrase lies the agenda not to rebuild an economy for the five million, but for the one percent that have always ruled the roost.

It was just six months ago, In November, that the media were reporting:

'This winter, 29,000 emergency housing grants were made - doubling last year's tally - at a cost of NZ$41 million ($A38 million). Hardship grants for food have also soared. More than half a million food grants were made in the three months to September, costing NZ$167 million ($A155 million), a figure that's tripled over five years.'

The figures have obviously deteriorated considerably since then. The question is do we really want to rebuild a economy which has seen the level of inequality grow to the point where the one percent owned 29 percent of the all the wealth generated in 2017 while bottom 30 percent of the country got barely one percent of all the wealth created in the same year. How can we all be on the same side when two New Zealanders, Graeme Hart and Singapore-based Richard Chandler, have more wealth than the poorest 30 per cent of the adult population?

So we should not be co-opted into accepting that we're all in the fight 'together' to rebuild the neoliberal economy unless we are prepared to allow such rampant inequality and poverty to continue to exist. Right now we're living in a considerably damaged plutocracy and our job should be  to pull it down and start again - not rebuild it. That's what the team of 4,950,000 should do. The ninety-nine percent of us.