WHO ARE AMERICA'S REAL LOOTERS? 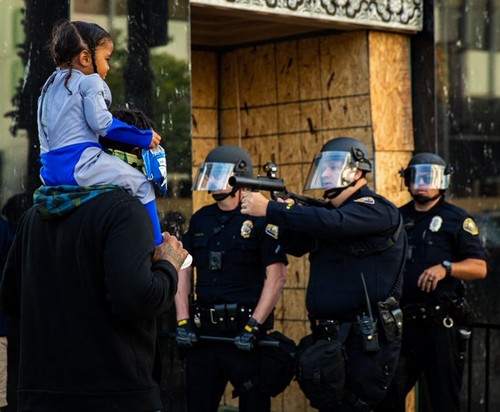 Who are the real looters in Trump's America?

A big march can be tolerated. But there is no form of protest, expressing real rage and demanding real change, that will not be smeared and dismissed. For being too disruptive or too destructive; too incoherent or too orchestrated. It's a power struggle and power fights back. Naomi Klein

WHILE THE MURDER of George Floyd has been the catalyst for the widespread and huge demonstrations in the United States, it is no coincidence that they have come at a time when economic inequality in the land of 'free enterprise' has never been greater.

While the political establishment and corporate media have been playing up the looting of various shops and businesses, they have never had anything to say about the far greater ransacking of America by the one percent. Indeed it is only the rich who, in recent times, have enjoyed even greater prosperity - at the expense of everyone else. But you won't hear that being talked about on CNN or Fox News.

Over the past decade the number of American billionaires has more than doubled - from 267 in 2008 to 607 last year. The United States is now a society where just three Individuals have more wealth than the bottom half of society (160 million people). That's Bill Gates, Jeff Bezos and Warren Buffett.

But despite their astronomical wealth, the American capitalist elite contribute little to the overall well-being of American society. In their book The Triumph of Injustice, Emmanuel Saez and Gabriel Zucman outline how in 2018 America's 400 richest Americans 'paid a lower total tax rate — spanning federal, state and local taxes — than any other income group.'

Between 1980 and 2018, the amount of taxes that the super-rich paid relative to their wealth decreased 79 percent.

But enough is never enough for America's wealthiest. They always want more. According to the Economic Policy Institute, between 1979 and 2018 worker productivity—how much value a worker produces in their job—increased by 70 percent, but hourly wages have only increased by 11 percent. That difference, the 'surplus value', has just been pocketed by employers, shareholders, and CEOs like Jeff Bezos and Elon Musk. Yet the likes of Bezos and Musk are held up by the corporate media as entrepreneurial heroes, men who have special gifts and abilities.

In stark contrast the coronavirus pandemic has seen over 40 million American's lose their jobs - and this is only the official figure. Meanwhile landlords have been evicting more and more people who are simply unable to pay the rent. But the Trump administration has actively sought to bail out corporate America and has done little to assist the American working class.

Perhaps America's future rests in removing the country's real looters. The American political establishment and the corporate media have sought to delegitimise the demonstrations alleging they are being manipulated by everyone from the Russians to Antifa. CNN has even alleged that white supremacist groups have infiltrated demonstrations. The political establishmennt have sought to put up a smokescreen to obscure the reality that these demonstrations are the expressions of people, who in capitalist America, have nothing left to lose.