ANNE SALMOND : LOTS OF AROHA DOWN AT THE FOOD BANKS 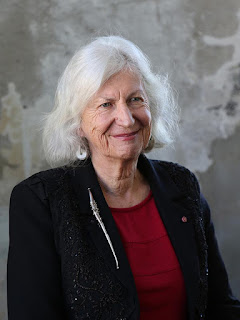 According to Professor Anne Salmond we're lucky to have Jacinda Ardern as our Prime Minister. Yes, the folk are jumping up and down for joy in the queues outside the food banks..

PROFESSOR ANNE SALMOND is something of the archetypal liberal. So no one should be surprised that Salmond should use an authoritarian figure like Donald Trump to boost her own leader. She writes that Prime Minister Jacinda Ardern has not only 'faced down mini-Trumps in New Zealand with her urgings for aroha and kindness' but she is also apparently forging a new philosophy of governance. But Salmond fails to enlighten us as what this brand new form of governance actually is.

This sort of stuff goes down a treat with other uncritical liberals and ends up on websites like Newsroom and discussed on RNZ and so the myth of Jacinda Ardern's 'enlightened' politics is perpetuated. Salmond lives within that rarified and privileged liberal milieu that orbits around planet Ardern so its also not a surprise that she can hail Arden's 'aroha' and 'kindness' while completely ignoring that the Labour Government that Arden leads is enforcing a neoliberal status quo that is only entrenching New Zealand's chronic level of poverty and inequality. If this is Ardern's new philosophy of governance  then there are tens of thousands of struggling New Zealanders who would like something else. Thanks.

Anne Salmond, who doesn't have to worry about little things like putting food on the table each day, is out of touch with the cold economic realities that many Kiwis have to face.

Inevitably she praises another centrist politician, US President elect Joe Biden, failing to grasp  that Biden's platitudes about 'unity' and 'the American way' are not a credible answer to a Trumpism that has tapped into the anger felt by much of the American working class - otherwise some 74 million Americans would not have voted for Trump.

But Salmond is not a stranger to empty rhetoric herself. In 2017 she condemned the neoliberalism of the former National Government while hailing Labour's election victory as 'a collective sigh of relief that we might finally have the kind of leadership that restores our core values as New Zealanders.' I'm assuming that Salmond doesn't think those 'core values' involve bailing out the wealthy while ensuring that the poor remain poor. However that hasn't stopped Salmond characterisng Ardern's dire centrist politics as somehow politically enlightened. Its exactly this kind of liberal elitism that contributed to the rise of Donald Trump and its probably more by accident than design that such a political backlash hasn't developed in this country...yet.