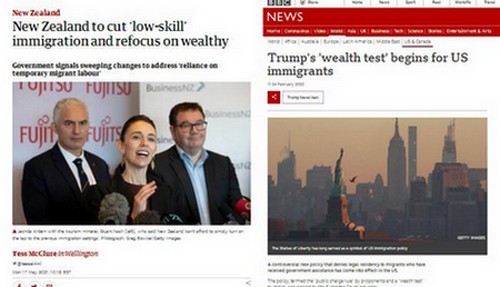 Jacinda Ardern is following in the racist footsteps of Donald Trump but does anybody in the mainstream media care?

CLEARLY PRIME MINISTER Jacinda Ardern knows something that we don't, because the local and overseas literature tells us that there is no actual evidence that immigration suppresses local wage levels. But according to Ardern, immigrants 'have been coming to New Zealand, working in low-paid jobs, struggling to find decent housing and at the same time in the New Zealand economy we see it suppressing wages. Our view is, now is the time to look at those settings.'

But a 2006 report published by the then Department of Labour says that immigration has had little impact on wage levels. Using data from the New Zealand census (1996, 2001, 2006) the report found that 'overall, immigrants do not have a negative impact on the wages of the New Zealand-born population.'

Westpac acting chief economist Michael Gordon told RNZ on Tuesday that international evidence suggested the use of migrant labour tended to have a neutral affect on wages.

But by pretending to 'fix' a problem that doesn't exist, Ardern has scapegoated the majority of migrants in order to justify the new policy  that will favour wealthy  immigrants. There are no prizes for guessing the countries these wealthy new immigrants will predominantly be coming from.

Just over a year ago then National Party leader Todd Muller was hauled over the coals for displaying a 'Make America Great Again' baseball cap in his office.

It was, of course, Donald Trump who expressed a wish to only have rich immigrants living in the United States. He complained about why  'all these people from shithole  (Africa and Haitian) countries come here.' Under the Trump administration, wealth tests began in February 2020.

While Trump got justifiably attacked for his prejudice and xenophobia, Ardern has managed to avoid such charges. Across the media, from RNZ to Newsroom, there has been barely a whisper of criticism and the charge of racism has certainly not been laid at the Prime Minister's door - even though she's following firmly in the footsteps of Donald Trump.

You might of thought this would of been the perfect story for TV3's Tova O'Brien to pursue. After all, she was one of the journalists who went after Todd Muller and his MAGA cap. But, obviously, she's been too busy getting excited about an opinion poll...