Home » capitalism » economics » neoliberalism » socialism » IS THIS ROTTEN SYSTEM THE BEST WE CAN DO?

IS THIS ROTTEN SYSTEM THE BEST WE CAN DO? 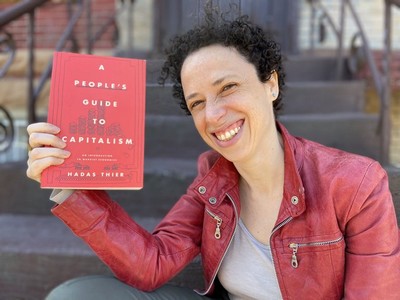 The political establishment and its cheerleaders have long pretended that Karl Marx's theories are irrelevant to pressing national and global problems. But that view has become less and less credible as more young people, in particular, have become to question the foundations and future of capitalism. As Hadas Thier explains in her new book A People's Guide to Capitalism, 'the economic system of capitalism is intimately connected to society's greatest challenges of war, health and health care, climate change, and oppression. Millenials' turn toward socialism signals an attempt to answer these questions. A new generation is investigating anti-capitalist theories and ideas, which are no longer tainted with the false 'socialisms' of the totalitarian states of the past.'

FOR MOST people economics remains an impossibly obtuse field, the preserve of economists, politicians and a few commentators who get paid to write about 'the economy'. And we assume they know what they are talking about. All those figures and statistics. It must make sense, right?  But the truth is that they could just be saying 'gobblygook' and most of us would be inclined to believe them. This is something that Hadas Thier experienced as well. In the introduction to her excellent A People's Guide to Capitalism she writes:

'Twenty years ago, when I first picked up a book on economics, I made it about two pages in before I broke down in tears, feeling hopeless that I could ever understand economics. The capitalist system in general, and economics in general, are purposefully mystified. Analysing how capitalism works is left to 'the experts' and if things look a little askew to you, well, that must be because you don't know any better. This is doubly and triply so for working class people, women, people of colour, and other oppressed constituencies who are daily barraged with the message that we cannot hope to comprehend complex systems and ideas, let alone hope to impact them.'

Thier rejects the view, paraded in our media day after day, that the economy can simply be 'explained' by just crunching the numbers and watching  the stockmarket go up and down. She starts from the basis, as defined by Karl Marx, that capitalism is above all else, a social relationship of production. So the profits are not the result of entrepreneurial cleverness or risk-taking but the outcome of an exploitative relationship between the two main competing classes of capitalist society : bosses and workers. But you won't hear this being talked on the business news reports on RNZ or on the six o'clock television news shows.

Thier uses the surgical tools of Marxism to dissect capitalism and, along the way, outlines how mainstream economics fails to explain the regular and deepening crises of a system once described as humandkind's crowning achievement. She writes that mainstream economics has no answer for capitalism's failures because it 'starts and ends at the surface of the economy - price fluctuations, monetary policy, and financial markets. But Marxists argue that crises originate at the system's core and are not imposed on the system from outside'.

And for liberals who hanker for the good old days of the regulated economy, Thier observes that 'Keynesian economists offer an explanation of crises as inherent to the system, ultimately, since Keynes did not see growth or profits as essential to the system, he assumed regulation could provide a means to reassert the harmony of capitalism'.

A People's Guide to Capitalism is written in a straightforward and accessible manner which won't have the reader throwing the book down in frustration after the first few pages. This is, thankfully, not a densely written academic tome destined to be read only by other academics. Thier, unsurprisingly, is not an academic economist but rather a working class writer embedded in the struggles of the labour movement.

Is this rotten system the best we can do? That's a question that Thier asks the reader in the introductory chapter. The answer, of course, is that isn't. And, as she smoothly demonstrates in her book, Marx provided us with a set of ideas that can be used not only to interpret the world that we live in, but to fundamentally change it as well.

A People's Guide to Capitalism is published by Haymarket Books.