KATE HAWKESBY : INTERRUPTED LIFESTYLES OF THE RICH AND FAMOUS 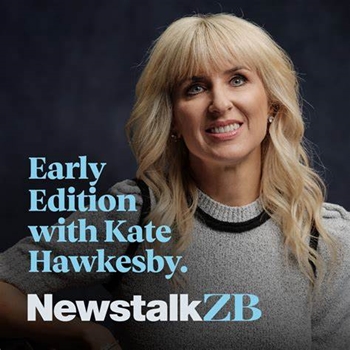 Why is Newstalk ZB's Kate Hawkesby all hot and bothered about epidemiologists Siousxie Wiles and Rodney Jackson?

THERE ISN'T A DAY that goes by when business leaders are not in the media demanding to know when business can begin extracting surplus value from the workforce again. Having already pressured an ineffectual Prime Minister Jacinda Ardern into dropping Auckland to level 3 and then loosening the restrictions around level 3   - with the inevitable upsurge in delta virus cases - they now want to know when lockdown restrictions will be fully lifted in Auckland.

Perhaps one day the media will venture away from the corporate boardrooms and the corridors of political power and seek the views of people living in less than ideal circumstances; like someone sharing a three bedroom house with nine other people. I'm guessing of course, but I don't think they'd be that all that keen to be further exposed to the delta virus.

One of the loyal allies of business is Newstalk ZB's Kate Hawkesby. She's been banging on about the sheer unfairness of lockdowns for weeks. According to her, those opposed to 'freedom' are, well, cowards. They are, says Hawkesby, 'trapped inside the fear and unable to get out'.

She says that its epidemiologists like Siousxie Wiles and Rodney Jackson who are responsible for generating this ill-founded fear. They have, complains Hawkesby, been 'given so much airtime and limelight throughout this pandemic.' Its worth noting at this point that Hawkesby's partner is Mike Hosking - another opponent of lockdown restrictions - and who is on air every weekday morning on Newstalk ZB  from 6am to 9am. So he's getting far, far more 'airtime and limelight' than either Wiles and Jackson will ever get.

Hawkesby likes to think of herself as urbanely sophisticated so she would not appreciate the comparison to Donald Trump. Nevertheless her crude attempts to discredit scientists like Wiles and Jackson simply because she doesn't like what they have to say reeks of Trumpism. It smacks of anti-intellectualism but this is understandable since she makes some kind of living trading her opinions on talkback radio - which is not known to be inhabited by great minds.

Hawkesby says Wiles and Jackson 'risk becoming increasingly obsolete and irrelevant.' Gosh. So exactly what is it that needles Hawkesby? Perhaps its comments like this from Wiles, disagreeing with the decision by the Labour Government to drop Auckland to level 3:

'What’s so distressing about this approach is that the burden is not going to be felt equally. We’ve seen this with whose been calling for the lifting of restrictions. It’s been the wealthy and privileged. That’s because they have access to private health care and they’re not going to be as affected.'

In 2018 Hawkesby and Hosking sold their Remuera mansion for $9.6 million and bought a lifestyle bloc in Matakana. They paid a reported '$4.5 million for a modern, 297 square-metre, four-bedroom home on 5.54 hectares of rolling countryside.' In 2019 the couple also paid $4.6 million for 'a 323 square-metre, four-to-five-bedroom apartment at the Newmarket end of Remuera.'

Yes, those calling for the lifting of restrictions are certainly the wealthy and privileged. For reasons that escape many of us, Hawkesby gets to parade her wealth and privilege on Newstalk ZB and call it journalism.