THE VIRUS OF CANCEL CULTURE 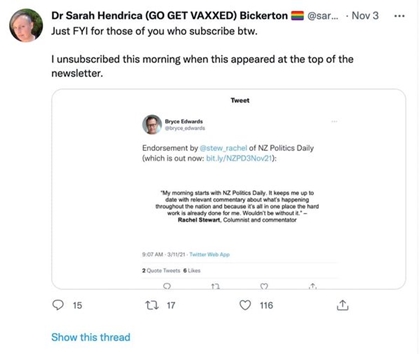 The call has gone out to cancel NZ Politics Daily -  merely because it ran a recommendation by former NZ Herald columnist Rachel Stewart. Meanwhile Hamish Keith has suggested that Bryce Edwards, the founder of NZPD, might like to put on some 'concrete shoes' and pay a visit to the bottom of a lake.

LAUNCHED IN 2011, NZ Politics Daily is a useful compendium of news and views emailed to its subscribers Monday to Friday. Its strength lies in that provides an exhaustive list of links to stories both in the local mainstream media and in the blogosphere. Rather than having to trawl through the internet and maybe still not find the stories they are looking for, subscribers can often simply refer to NZPD to find what they are looking for.

The publication doesn't beat any particular ideological drum. It is strictly non-partisan. In the words of its founder Bryce Edwards, the aim is to provide material that is 'informative, insightful, interesting or influential.' In a general sense, it can only contribute to a more informed discussion and debate on the issues of the day.

A recent edition began with this recommendation from a subscriber:

'My morning starts with NZ Politics. It keeps me up with relevant commentary about what's happening throughout the nation and because it's all in one place  the hard work is already done for me. Wouldn't be without it.'

The person praising NZPD was former NZ Herald columnist Rachel Stewart. And that's proved to be a problem for certain people.

Rachel Stewart has well known differences of opinion with the transgender community, especially on the issue of gender identity and the Labour Government's proposed sex self identification legislation. Over recent years her political opponents have waged a campaign of vilification against her - which I have written about extensively on this blog.

What has driven the anti-Stewart campaign is a refusal by the liberal left to engage in open debate about the issue of sex self identification. Instead it has worked hard to shut down any discussion before it even starts.

It appears that even Rachel's innocent praise for the NZPD was enough to send her opponents into fits of intolerant rage. So Dr Sarah Hendrica Bickerton, a Research Fellow at Auckland University, tweeted last week that she was unsubscribing from NZPD because it had been endorsed by Stewart. She hinted that other people might like to consider cancelling their subscriptions as well.

A supporter of Bickerton's authoritarian and intolerant stance was Hamish Keith. 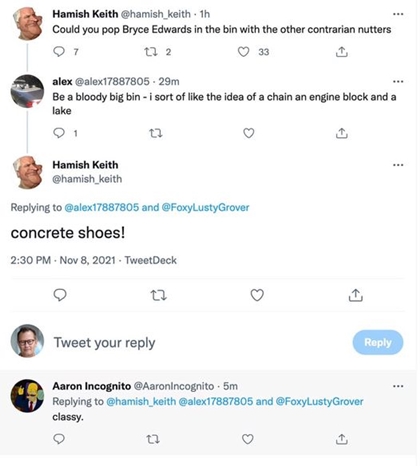 He tweeted 'Could you pop Bryce Edwards in the bin with the other contrarian nutters.'

Some of Keith's followers took the opportunity to fire potshots at Bryce Edwards.

They included David Rowe (@DavidRo31977346) who tweeted: 'A few years ago Bryce used to be an objective fair minded political commentator often accused by David Farrar as too 'Left wing' and what Key used to call the liberal left. It's a stretch to call Bryce as a Leftie now seems to have done a 360 turn around.'

Rowe is a supporter of Jacinda Ardern and the Labour Government so he might well be annoyed with Edwards view that post-coronavirus, 'rebuilding the old order won't be good enough'.

Before the last election he wrote:

'If Labour is to embody the spirit of the times, it will embrace radical new economic policies. This means proposing new progressive income taxes, a wealth tax, a universal basic income, a massive state housing programme, and an overhaul of the public health system. And that’s just for starters.'

This is hardly the view of someone travelling to the right, as David Rowe claims. But given the falsehoods spread about Stewart, we should not be surprised that Edwards should also find himself the victim of deliberate smears.

And given that Rachel Stewart has often been smeared by her opponents as encouraging violence against the trans community - which she doesn't - its grimly ironic to see Hamish Keith and his Twitter companions suggesting that Edwards might like to see the bottom of a lake - permanently.

Keith recently got into a Twitter exchange with singer Dave Dobbyn. When Keith tweeted:  'The unvaccinated will feel isolated and picked on. So they bloody well should”, Dobbyn replied: 'I thought we’re fighting COVID, not humanity.'

This led to a Twitter backlash against Dobbyn who subsequently deleted his account. He later clarified his position: 'I’m double vaccinated. I encourage it for everyone. But I call out the unkindness directed at those who haven’t yet taken the step.'

'The frequent attempts to control free speech, limit debate and stigmatise and bully people into submission has exposed a 'progressive politics' that has degenerated into moralising and a divisive activism that can only continue to fragment the left rather than promote solidarity. Given that most of Rachel's critics are also supporters of the neoliberal Labour-led government and its Green Party poodle, perhaps that's what the real agenda is. Rachel herself has been consistently critical of the Jacinda Ardern-led government and has been equally scathing of the Green Party's politically-bankrupt 'green capitalism'.