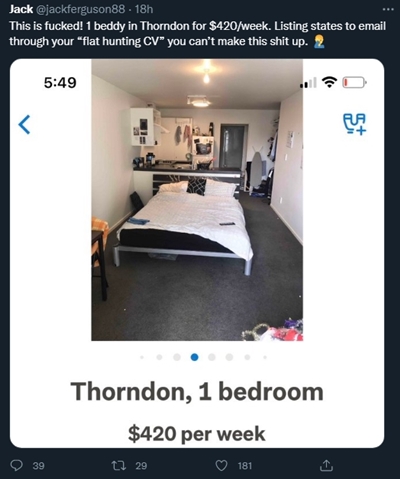 Despite the Prime Minister declaring that house prices could not continue to keep increasing at the rate they are, prices have climbed another 24 percent in just one year. One of the beneficiaries has been Jacinda Ardern herself...

WHILE THE media might of been  preoccupied with the inappropriate activities of Clarke Gayford this week, less attention has  been paid to the news that the national average asking price for a house hit a fourteen year old high in December. The asking price is now close to a million dollars - $985,000 - up some 24 percent in the space  of  just a year.

One of the beneficiaries of the continuing surge in house prices has been the Prime Minister herself. Since the election of her government in 2017 Ardern's Auckland home has increased in value by some $600,000 and  is now worth $2.7milion. She really does have little idea of what life is like for tens of thousands of New Zealanders.

And while Ardern continues to insist that her government is working to 'cool the market', there's no evidence of that actually occurring.  Yet it was in November 2020 that Ardern declared that house prices could not continue to keep increasing  at the rate they are.

While governments, both Labour and National, continue to defend a housing model that views housing as a commodity rather than a social need, people will continue to be forced into untenable housing situations, contributing to job precarity, mental and physical health problems and poverty.

Politicians like Jacinda Ardern might recognise there is a housing 'problem'  but they continue to ignore the structural causes of unaffordable housing. The reality is that the Government, representing the interests of the banks, property investors and the finance sector, is holding the country hostage over a basic need like housing. We have the capacity to produce secure and affordable housing for all but the present market-led model remains an obstacle in the way of achieving this goal.