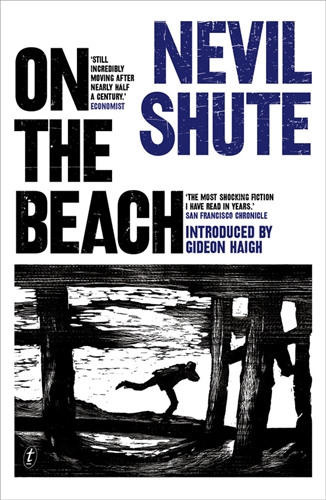 Although Omicron suffocates people to death, the Government continues to insist that its impact will be 'mild'.

IN NEVIL Shute's 1957 novel On the Beach the last surviving representatives of humankind, the people of Australia, New Zealand and the South Pacific, are waiting to die. The novel details the lives of a group of people in Melbourne as they await the arrival of the deadly radiation following the devastating nuclear exchange in the Northern Hemisphere a year or so earlier.  The title page includes an extract from TS Eliot's poem 'The Hollow Men' which includes the lines 'This is the way the world ends / Not with a bang but a whimper .'

I read the novel many years ago but picked it up again just recently. Although a little dated in places - it is, after all, over sixty years old - On the Beach remains a sobering work. There is no happy ending and it could well be considered to be a forerunner of what has come to be known as dystopian fiction. The novel captures the mood of its time and the widespread and entirely justifiable fears about global nuclear destruction that gripped people during the 1950s and into the 1960s.

After putting this book down I was left with the uncomfortable feeling that, in 2022, we're living in a country which is anxiously, even fearfully, waiting for the arrival of another malignancy. While the arrival of Omicron might not wipe out the entire population it will lead to widespread illness and an unknown number of deaths. Those with immune deficiency disorders and underlying health conditions do have cause for concern.

If what is occurring in Australia is indicative of what is about to occur in New Zealand then we're not approaching anything that can be considered to be 'normality'. On Saturday and in New South Wales alone, 50,000 new cases were recorded - up from 40,000 the previous day. It is not surprising that folk here are lining up for the recommended booster shots.

But in an effort to convince us all that it can still be 'business as usual' in 2022, the message being pushed by the Government is that while, yes, Omicron might be far more contagious than its Delta predecessor, its impact is also milder. Everyday there seems to be someone in the media, mostly Government representatives and business leaders, advising us we should just 'stay calm and carry on'.

The problem with this optimistic narrative is that it seems to based more on wishful thinking and hopeful speculation rather than the verdict of any hard scientific inquiry. There have yet to be any real large-scale population surveys in order to get a more accurate assessment of Omicron's severity.

Furthermore we have little idea how Omicron will impact on long term health. To say that someone has 'recovered' from Omicron may yet prove to be totally misleading.

The World Health Organisation itself has warned against describing Omicron as 'mild', saying its  hospitalising and killing people throughout the world. And Maria Van Kerkhove, the technical lead of WHO's  COVID-19 response team has commented :

'Omicron is not mild. Omicron is not the common cold. And that rhetoric that is out there, the narrative that is out there, is dangerous and it is deadly. Omicron and Delta are infecting individuals, they’re putting people in hospitals, and if you have huge numbers of cases, you will have increased hospitalisation. This virus, Omicron, will reach vulnerable populations, it will reach older populations, and will see increasing deaths among those individuals. So to suggest that Omicron is just a mild infection, is just really dangerous.'

In truth, Omicron is little different to any other variant of COVID-19. It is still a deadly disease that suffocates people to death. And there is nothing 'mild' about that.