TIME FOR A NEW LEFT 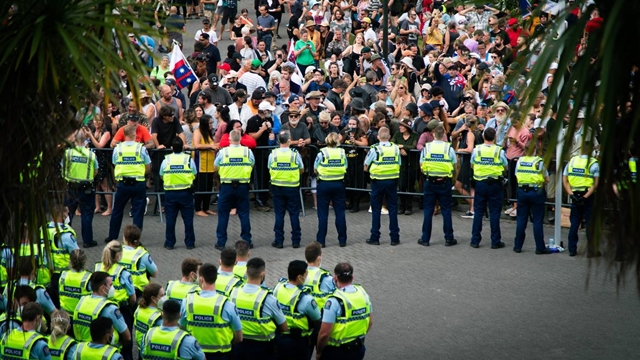 The Wellington occupation has fractured the New Zealand left and the pieces cannot be put back together again.

AS THE WELLINGTON protest enters another weekend the hostility towards the protest remains largely the same. The same charges  of 'neo fascism', 'extremism', 'anti-semitism' and other familiar political insults continue to be thrown by the opponents of the protest. We have reached the point of tedium.

There has even been a suggestion that the protest threatens a right wing insurrection, similar to what occurred in Washington last year. That view has been peddled by TVNZ's  Kristin Hall. She credits so-called 'far right expert' Byron Clark for his 'insights'. It seems Clark has become the 'go to' guy for ludicrous paranoia about the far right. His purpose though is to allow people like Hall to falsely believe that their wild attacks on the protest have some kind of authoritative underpinning when its just someone rummaging around the internet for any old rubbish to throw at the protesters.

The problem remains for opponents of the Wellington protest is that all their allegations of 'the alt right up to no good' bears little relationship to the reality on the ground. With every allegation made, reality bites back. Extremist? Initial surveys show that protesters seem to vote in a manner not dissimilar from everyone else. Racist? Over a quarter of the protesters are Maori. Anti-semitic? There are Jewish folk amongst the protesters.

The fiction that the Wellington occupation is actually a convention of the far right can only be maintained by determinedly ignoring reality. Which explains why academic and commentator Bryce Edwards and Newstalk ZB journalist Barry Soper have been the targets for so much on-going abuse. They have failed to ignore reality. They have not followed the approved narrative. They have been among the protesters and have not been able to find the hordes of alt righters that should be there if we are to believe people like Neale Jones, Byron Clark and Clint Smith. Or Prime Minister Jacinda Ardern.

There's also not been the extensive violence we might of expected given the coverage of the protest as the work of far right extremists. After nearly three weeks the best the opponents of the protest can come up with is the occasional isolated scuffle with the police. And these have largely been prompted by police activity anyway. We've certainly got a long way to go before this protest ever becomes a Capitol Hill-style 'insurrection'. 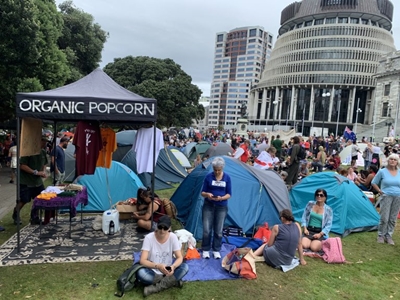 The opponents of the protest have been reduced to scraping the bottom of the barrel. We've moved from Jacinda Ardern's middle class allegations of bad parenting to police allegations of a 'stinging substance' thrown into the face of police officers. But the charge, seized upon by opponents of the protest and repeated without question by a compliant media, has proved to be false. The 'acid' thrown by protesters was actually the pepper spray of other police officers.
Despite Jacinda Ardern describing the alleged 'acid throwing' incident as 'disgusting', she has yet to issue an apology for her rush to judgement.

Despite the fact that this protest is a visible expression of the worker militancy that has largely been absent from New Zealand politics for many years, it has not been welcomed by the majority of the left. Indeed the most virulent attacks on the protest have been coming from those who claim 'left wing' or 'progressive' credentials.

Many of these attacks have been driven by a desire to defend the electoral interests of the Labour Government. But they are also driven by a fear of independent working class action that threatens the interests of a status quo that the left has become as much a part of as the political right it claims to be different from. It has a vested interests in protecting the political establishment and any threats to 'business as usual' must be extinguished.

So we now have officially-approved workers' organisations, like the Council of Trade Unions and the Public Service Association, denouncing the occupation and demanding that the protesters go home. The fear that the activities of 'the great unwashed' has generated is almost palpable.

It seems to me that this protest, whatever its outcome, has fractured the left in such a way that, like Humpty Dumpty, it cannot be put back together again. The divorce between a largely Labour-aligned left and the working class is now complete and irrevocable.

For a long time the rhetoric and activities of the New Zealand left depended on the idea that the interests of the left and the interests of the working class were at one. That illusion has been increasingly difficult to maintain because of the left's continued loyalty to a obviously right wing and anti-working class Labour Party. This protest has finally exploded that illusion.

What this protest has highlighted is that the working class no longer needs - and no longer wants - its officially approved caste of self appointed leaders who have consistently betrayed them in the past. The left's unrelenting hostility towards the protest has only confirmed for many that the present dysfunctional left is well past its use by date and needs to be replaced. It can't come too soon.