THE MEDIA PLEDGES ITS LOYALTY TO THE BRITISH MONARCHY 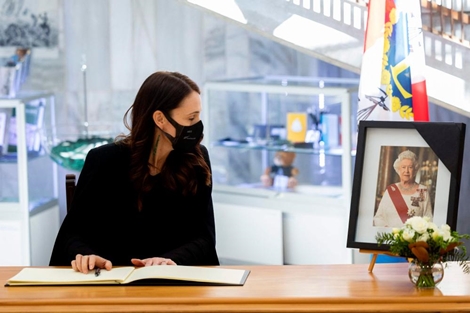 The mainstream media's coverage of the death of Queen Elizabeth II has been embarrassingly servile.

AS I WRITE THIS, the corporate media is telling me that I'm in shock or grieving -or both- over the death of one of the richest women in the world, with an estimated personal worth of some $US600 million. Queen Elizabeth II also headed 'Monarchy PLC' that has nearly $US30 billion worth of assets. At a time of social crisis and growing economic inequality, the political establishment are probably not overly keen to talk about the vast wealth amassed by one family.

What is important for them is that 'the royal baton' be passed from the late Queen to the newly-minted King Charles III with the minimum of fuss and a lot of tugging of the forelocks. To that end we have been reminded, repeatedly, that British Royalty goes back some one thousand years - right back to William the Conqueror - with the implication that it must continue in perpetuity because it is the natural order of things. We haven't quite reverted back to the days when Charles I claimed he had the divine right to rule but the media coverage of the Queen's death has been so fawning that you would easily be mistaken into believing that Queen Elizabeth II was so much closer to God than the rest of us plebs.

In times like these the true politics of our journalists comes into focus. Rather than being the independent and critical journalists that they should be, they have acted as the Queen's loyal courtiers. We have been regaled (I'm being polite) with stories about what a great Queen the Queen was, how she stood above the daily political fray (which isn't true), how she visited New Zealand ten times and what about those Corgi's and blah, blah, blah. So much said but so little substance in all of it.

The media has many hours to fill - because there apparently isn't any other news to report - that journalists have been repeating the same stories. So one tale recounted by Tova O'Brien on Today FM also got an airing by Mike Hosking on Newstalk ZB. Incidentally, spare a thought for poor old Mike. He actually broke down in tears on air this morning while talking with Kate Hawkesby. Even she, a dedicated monarchist, seemed taken aback by Mike's outpouring of unexpected emotion.

While the mainstream media likes to claim that the monarchy is a source of social unity and is a comforting 'constant' in a changing world, the reality is that it sits atop a class-ridden British society and legitimises privilege in general. And, of course, we'll just draw a curtain around all the sordid scandals that the Windsor's have been involved in - like royals donning Nazi uniforms and partying with pedophiles. Maybe there's something appropriate that the new King is the same guy who said he wanted to be reincarnated as Camilla's tampon.

While Prime Minister Jacinda Ardern might think that the Queen was 'extraordinary' there is nothing 'extraordinary' about a political system that ensures that one family will receive taxpayer-funded grants even when its already immensely wealthy, palaces in which to live and the bootlicking deference of both elected politicians and the media. The idea that some people are born to live such privileged lives - and that it is not just an accident of history - is a grotesque belief.

I'll leave the last word to the Polish socialist Rosa Luxemburg who observed of monarchy:

'We oppose the monarchy, even if it were to cost half as much as it does: we would not want it even if it were for free! We prefer the most expensive republic to the cheapest monarchy; this is not a matter of money: the monarchy is the most backward tool of class rule.'

I'm sure Rosa's views won't be discussed by Tova or Mike or Susie in the coming days...