KELVIN DAVIS : YOU'RE NOT A PROPER MAORI! 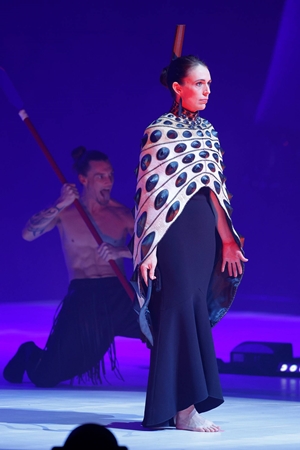 The attack of Kelvin Davis on ACT MP  Karen Chhour will have been looked on unfavourably by working class Maori who have yet to see any economic benefit from a Labour Government with a large Maori caucus. Meanwhile, Prime Minister Jacinda Ardern is walking the fashion catwalk.

GIVEN THE WAY that politics is so often filtered through the lens of race, there was a certain predictability in the way Deputy Prime Minister Kelvin Davis attacked ACT MP Karen Chhour this week. We have reached another identity politics low point when one Maori politician accuses another Maori politician of being un- Maori. Identity politics is now devouring itself. It follows Willie Jackson, the Minister for Maori Development, describing ACT leader David Seymour as 'a useless Maori'. As has been noted in the social media, Jackson, sitting behind Davis in Parliament, was seen to enjoy the graceless attack on Chhour.

As Willie Jackson also suggested in his attack on Seymour, Davis implied that ACT's policies were unfavourable to Maori and went on to say that Chhour was viewing the world 'from a vanilla lens'. In another country and in another era, she might well have been described as an 'Uncle Tom'. According to Davis she needs to get with the program which, apparently, is just what his Labour Government is doing.

But Kelvin Davis really shouldn't throw stones when he's living in a glass house. He may not like the market led policies of ACT but he's not arguing from a position of strength because he's offering nothing in the way of a real alternative. The Maori caucus, after all, has been a loyal supporter of the Ardern Government's neoliberal policies throughout its term in office. There isn't really an ideological chasm between ACT and Labour - the differences are largely one of emphasis rather than substance.

Despite the chest-thumping by Kelvin Davis, Labour's policies have done little to alleviate the economic plight of working class Maori. They might have assumed that the largest Maori caucus in Labour Party history would contribute to the Labour Government delivering the economic goods for Maori. But it hasn't. The level of economic inequality and poverty has continued to increase under the Arden Government and working class Maori, like their Pakeha brothers and sisters, are again carrying the economic burden of an economic system in crisis.

It's unlikely that the parliamentary performance of Kelvin Davis will be looked upon kindly by working class Maori. They may well come to resent this Labour Government cloaking itself in the cultural garb of Maori while continuing to shaft them economically. As commentator Bryce Edwards has noted Labour's failure to deliver economically for working class Maori will likely see it struggle to retain the Maori vote next year. As Edwards observes:

'Generally, the Maori caucus in Labour has been focused on constitutional and cultural reforms. But are these the right ones? Unfortunately for Labour, the main concerns of Maori voters – especially those who are struggling – are more materialist, such as housing and employment.'

Back in 1977 and before the election of the Fourth Labour Government and the advent of neoliberalism, the Maori group Te Roopu o Te Matakite wrote: 'We see no difference between the aspirations of Maori people and desire of workers in their struggles. We seek the support of workers and their organisations, as the only viable bodies which have sympathy and understanding of the Maori people and their desires. The people who are oppressing the workers are the same who are exploiting the Maori today.'

That view remains relevant today. It's certainly more relevant than a politically feckless  Prime Minister walking the catwalk in Maori inspired fashion to the oohhs and aahhs of a well-heeled middle class audience.