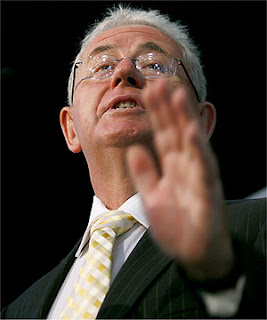 Michael Cullen, 'the friend of the working class', thinks it would be just great to see ordinary Americans get whacked with a $750 billion bailout package for Bush's cronies on Wall Street.

Just a few weeks ago the Minister of Finance Michael Cullen was accusing the Leader of the Opposition of being complicit in the crisis of global capitalism. Because John Key used to work for Merill Lynch Cullen suggested that Key was not to be trusted with reins of political power.

With a general election looming, Cullen and the Labour Party are throwing mud at Key and hoping some of it will stick. Nevertheless Cullen has consistently attacked Key on the basis of his past profession as a money trader - a term that Cullen has used derisively in Parliament.

Cullen often gets away with stuff like this because naive young journalists thinks he knows what he's talking about and they don't know anything about the days when Cullen followed Keynesian economics.

Those days have long gone and Cullen has steadfastly followed the neo-liberal 'orthodoxy'. He's as much a free marketeer as Key but still gets away with suggesting that he isn't another just big business lackey.

So it comes as no surprise that Cullen has come out in support of the proposed bailout for Wall Street. The man who attacks Key for once being a 'money trader' thinks it would be just dandy if the American working class bailed out the fat Wall Street clowns who have made such a mess.

Why should the American working class be lumbered with the bill?

Cullen says that if the bailout plan isn't approved it could adversely impact on the New Zealand economy. Yet Cullen has previously been saying that the New Zealand is relatively immune from the Wall Street crisis!

Since George Bush has been in office, median family income for working-age American families has declined by over $2,000. More than seven million Americans have lost their health insurance. Over four million have lost their pensions. Consumer debt has more than doubled. And foreclosures are the highest on record. Meanwhile, the cost of energy, food, health care, college and other basic necessities has soared.

Poor Americans are now living in tent cities because they cannot afford to rent an apartment or house.

Yet Michael Cullen, 'the friend of the working class', thinks it would be just great to see ordinary Americans get whacked with a $750 billion bailout package for Bush's cronies on Wall Street.

The CEOs of Wall Street firms have received staggering amounts in bonuses, including $39 billion in bonuses in the year 2007 alone for just the five major investment houses. Where has all that money gone? I don't see of any of these Wall Street CEO's offering to pay the money back.

But it is these rogues who should be paying for this bailout - they made the mess, they can clean it up.

These are the rogues and bandits that Michael Cullen is supporting.
Posted by Steven Cowan on Friday, October 03, 2008