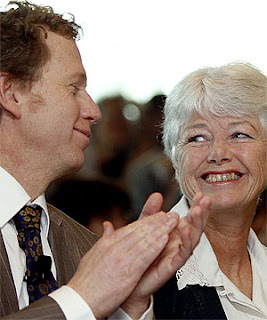 That the politically dishonest Green Party have decided to hitch their wagon to that of the Labour Party is no surprise.

What is annoying is the nonsense that co-leaders Russel Norman and Jeanette Fitzsimons were spouting at their press conference and the fact that the assembled media allowed them to get away with such self-serving rubbish.

Fitzsimons explained that the Green's had decided to go with Labour because Labour are apparently politically closer to them than National. She then said, with no trace of embarrassment, that, actually, Labour and National are closer to each other than they are to the Green Party.

Eh? Does anyone understand what this woman is talking about? She's saying that there isn't a lot of difference between Labour and National but they're still going with Labour? So on what basis did they decide to go with Labour? Did they flip or coin or something? Or, perhaps, have Labour promised the Green's a cabinet position or two? Is it just all about naked political ambition?

Remember, Fitzsimons is the same woman who told a Green Party conference that the terms 'left' and 'right' were old fashioned political labels. But apparently they're not so old fashioned to stop the Green's going with right wing Labour.

It all becomes clear when we understand that the Green Party is a straightforward right wing party. While Green parties in other countries are exploring eco-socialism, the New Zealand Green Party are all about tacking some environmental policies on to the free market framework. Or in, former socialist Norman's words – 'using the power of the market' to address environmental issues. Given recent events, I wonder if Norman still thinks 'the market' is such the mighty power he thought it was?

In a revealing statement a few months ago, out going Green MP Nandor Tanczos expressed the view that the parliamentary Green Party had to be mainstream, work with the other parties and, not rock the boat.

The Green Party, said Tanczos: ''needs to be able to work with all parties and cut across old political boundaries. It needs to be seen as a safe pair of hands.'

But, he said, outside Parliament it had to work with groups working for real change.

I criticised Tanczos at the time for political hypocrisy and opportunism, but we're getting exactly the same stuff from co-leader Russel Norman today. A fortnight or so ago he expressed the view that the Greens wanted to represent the poor and disadvantaged. Norman claimed that the Green's 'wanted to speak out for people who couldn't.'

The fact that the Green Party is giving Labour its support exposes Norman as the political charlatan that he is. Masquerading as a 'lefty' while lending his support to right wing economic policies is contemptible and should not be accepted.

How exactly does the neoliberal economic program of Labour help the poor and disadvantaged? How do such policies help the broader working class? Answer - they don't. But they might help Norman and his parliamentary colleagues keep their fat salaries and earn a seat in the cabinet.

The Green's want a 'left wing cover' to obscure and deflect attention from their right wing agenda and direction. Unfortunately some of the people who will vote for the Green's have been conned by the Green Party hierarchy and some fancy 'feel good' advertising - they genuinely believe a vote for the Green's is a vote for 'progressive' policies. In reality, its a vote for the same dismal and failed neoliberal economic policies that we have endured for over twenty years.
Posted by Steven Cowan on Monday, October 20, 2008