POLITICIANS AND THE RESERVE BANK BLAMED FOR AN ESCALATING ECONOMIC CRISIS 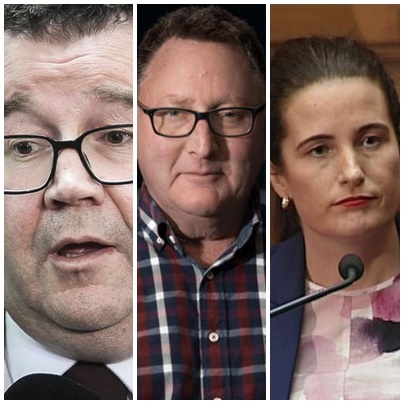 We might well be headed into a deepening economic crisis but the economic pain will not be shared equally. The only 'solution' that is being offered by the politicians and the Reserve Bank is to squeeze workers and the poor even harder. It's estimated that 130,000 workers will lose their jobs in the coming months and the cost of living crisis will continue to deepen. Bryce Edwards looks at the economic and political implications of the Reserve Bank's decision to steeply increase the Official Cash Rate.

WILL THE looming economic recession kill off Labour’s re-election chances? Is the Reserve Bank making things worse? And could a National Government do any better? These are some of the big political questions floating around after the full extent of the economy’s plight was made clear by the Reserve Bank yesterday.

Authorities are now clearly in the firing line for their handling of the economy and especially inflation. Politicians and officials are rightly being scrutinised because the public’s economic pain is worsening, and looks set to become more severe over the next three years.

The big news yesterday was the Reserve Bank’s unprecedented big increase in the Official Cash Rate, which will lead to higher interest rates. The Reserve Bank’s intention is to make the public feel poorer and therefore to stop spending so much.

Those with big mortgages will be hit particularly hard – with calculations a $500,000 loan will require an extra $12,000 in annual repayments. Many highly leveraged homeowners will struggle. Renters, too, will be punished, with costs being passed on by landlords in the form of rent increases.

That bad news doesn’t end there. The Reserve Bank says much more pain is on the horizon. They forecast the OCR going up to 5.5% next year, and they predict that New Zealand will be in recession for a year from June 2023. Some are now comparing this in scale to the Global Financial Crisis of 2008.

Not only will real wage growth go backwards, but the Reserve Bank also says unemployment is going to skyrocket – going as high as 5.7 per cent. Astonishingly, an estimated 130,000 more people are going to be out of jobs. And, to make things worse, the cost of living crisis is expected to deepen, with inflation now forecast to go even higher.

As always, the economic pain will not be evenly distributed. Young people, the already-poor, and recent home-buyers are all about to be severely tested and punished.

In terms of the forecast economic recession, there is no doubt that this is by design rather than just a forecast by the Reserve Bank. Governor Adrian Orr has said today that the bank is purposefully engineering a recession in order to bring down the inflation rate. He told MPs today that “We are deliberately trying to slow aggregate spending in the economy.” And he called on workers to accept lower wages to help the economy recover.

Of course, the big headline figure from yesterday is the Bank’s decision to increase the Official Cash Rate by 75 points to 4.25%, which has been labelled as “hawkish” by numerous economists.

In fact, many economists are going on record as saying that such a large OCR increase is a mistake, and will further damage the economy because it over-tightens monetary policy, reducing economic activity. For example, KiwiBank economist Jarred Kerr reacted negatively to the OCR rise, saying “We are looking at a Reserve Bank that is hell-bent on getting inflation down, but I think they are risking overcooking their response.”

Similarly, Westpac’s chief economist Michael Gordon questioned the necessity of the large rise, and BNZ’s head of research Stephen Toplis said that his bank would have raised the OCR by less.

Economics professsor Robert McCulloch of the University of Auckland also stated yesterday that the rise “is probably one gigantic mistake”, saying he would have “recommended a far more modest rate rise”. McCulloch argues that the Reserve Bank are playing politics and public relations rather than making decisions in the best interests of the country.

According to McCulloch, Adrian Orr has gone with a big increase primarily to stave off criticisms of the Bank’s performance: “The Reserve Bank has been profoundly stung by criticism… that it didn’t react to surging inflation last year and was asleep at the wheel. Now it wants to look tough, talk like it actually does care about inflation and make itself out to be really, really serious about meeting its target of 1 to 3%.”

McCulloch argues that the Reserve Bank, having been accused of being too soft on inflation for too long, is now recklessly going overboard to correct this: “The Bank is best likened to a drunk driver that has got the economy into skid and now is jerking the wheel in the opposite direction, but in doing so is over-reacting and will end up crashing the car. The car in this story is, of course, the Kiwi economy and everyone who has a mortgage.”

Another colourful analogy of the direction of the New Zealand economy comes from business journalist David Hargreaves, who worries that if we don’t see an improvement in inflation soon, “then we are probably all in a very small boat heading down a fast moving waterway without means of steering.” And he concludes his analysis of the latest Reserve Bank announcement rather ominously: “As far as the RBNZ is concerned inflation must be killed. Whether that will also kill the economy, we will find out.”

ROBERTSON AND LABOUR UNDER SCRUTINY

How much is Labour to blame for the current economic mess? There’s no consensus on this, but commentators are starting to speculate on how much Labour will be punished by the electorate when it seeks re-election next year.

Financial journalist Bernard Hickey writes today: “The central bank just made it massively more difficult for the Labour Government to win a third term, which was already in serious doubt.” And political journalist Henry Cooke adds sarcastically, “If there’s one thing voters love it’s a recession, high interest rates, and inflation – all at once!” Cooke says that Labour’s path back to re-election “became significantly more difficult yesterday” and “the Reserve Bank may have just decided the election”.

Herald political journalist Thomas Coughlan believes yesterday’s announcement is something of a turning point, showing Labour’s economic management has unravelled. He rightly points out that “Labour will find it very difficult to win an election during a recession.”

Coughlan explains that Finance Minister Grant Robertson now has a huge headache, because immense pressure is building on the Government to reduce spending, so as to bring down inflation. This isn’t good timing for election year, when Robertson wanted to be able to spend large on social policy. Instead, Coughlan suggests Labour will need to deliver “a parsimonious 2023 Budget and election manifesto.”

Stuff political editor Luke Malpass agrees that all the economic signs are now very bad for Labour’s re-election: “For Labour this is potential disaster territory heading into election year – with a poll expected in November”, and “next year should be the perfect climate for a centre-right party to be re-elected.”

Malpass predicts all sorts of economic pressures will make voters think twice about trusting Labour with their vote. For example, “the spectre – now likely – of nearly 8% mortgage rates on election day next year, will be a sobering one for many voters.”

In response, Labour is going to be under pressure to come up with some big economic changes. “Steady as she goes” won’t be an option. Labour may need to re-examine some of its core policies, especially in areas such as immigration. The role of Government policies in blocking immigrant workers from the country is now set to be a key area of debate.

Newshub political editor Jenna Lynch is also pessimistic about whether Labour can navigate the coming economic storm: “A world of pain is coming. They were hoping this inflation crisis would be short and sharp, but it turns out election day may well be an economic doomsday with the Reserve Bank forecasting these dark economic clouds rolling into the end of next year.”

She also reports that Labour is heading towards austerity: “Newshub understands the government is now running a massive ruler over its spending and looking at cutting loose some of the nice-to-haves rather than necessities.”

The notion that the Government is currently contributing to the inflation problem, means that Labour may feel the need to over-correct this by suddenly pushing the austerity brakes on their spending.

NATIONAL AND LUXON UNDER SCRUTINY

Despite all the criticism of the incumbents, no commentators are putting much faith in National being able to manage the economic crisis any better. As Malpass says, despite Labour’s problems, “None of this is to say that National will romp in, or even that it is giving particularly compelling solutions.”

In fact, National is simply abandoning its own core economic policies in response to escalating economic pain. Yesterday it capitulated on tax cuts, with leader Christopher Luxon signalling its plans to drop Labour’s top rate of tax are now gone.

Coughlan explains that jettisoning the tax cuts policy was inevitable, and so National took advantage of the chance to get rid of an embarrassing policy: “A bad news day for the Government is an ideal day for the opposition to bury bad news. In an interview with the Herald this morning, and later following Parliament, Luxon essentially said his policy of axing the 39 per cent top tax rate was dead. The policy is expensive, polls terribly, and appeals only to voters who already [vote] Tory.”

Increasingly National’s election pitch is simply that they are “not Labour”. But is that really enough during an economic recession? Does National have any policies of substance that might help navigate the current economic crisis? Even if voters punish Labour for mismanaging the economy, there are no signs that they should have confidence that National would do any better.