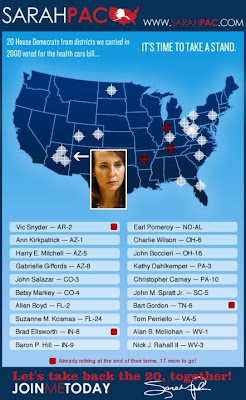 The Fox News coverage of the shooting of Arizona congresswoman Gabrielle Giffords and the killing of six other people by a lone gunman, has been notable for what the right wing news channel has not reported.

While it has played up the Democrat congressowoman's support for present US gun laws and her tough stance on immigration, it has failed to mention that her office was vandalised last week as a consequence of her support for Barack Obama's healthcare reforms.

It has also failed to report the words of Pima County Sheriff Clarence Dupnik who, while not naming Fox News directly, was clearly taking a swipe at organisations like it, when he said at a press conference:

"I’d just like to say that when you look unbalanced people-how they are-how they respond to the vitriol that comes out of certain mouths about tearing down the government—the anger, the hatred, the bigotry that goes on in this country is getting to be outrageous and unfortunately Arizona, I think, has become sort of the capitol. We have become the mecca for prejudice and bigotry."

Meanwhile we learn that Gabrielle Giffords was on Sarah Palin's Facebook and Twitter 'hitlist' for the 2010 elections.That's something else that has yet be to mentioned on Fox News..
Posted by Steven Cowan on Sunday, January 09, 2011