Home » economy » neoliberalism » zombies » OUT WITH THE OLD POLITICS

OUT WITH THE OLD POLITICS 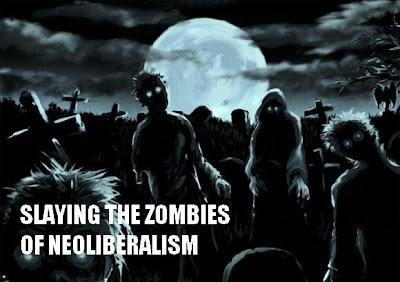 Two years after the meltdown of the global economy, the New Zealand economy remains mired in a quagmire of mass unemployment, growing poverty and social distress and no economic growth. But the very same theories and ideas that contributed to the economic crisis in the first place, continue to dominate public policymaking. It's time they were finally laid to rest.


They should be dead, but they still walk among us. They are the zombie theories of neoliberalism.

Some two years after the financial collapse that has plunged the world into a massive and deepening economic crisis, all of New Zealand's parliamentary parties, incredibly , still subscribe to the very ideas that contributed to the crisis in the first place.

While National's loyalty to neoliberalism is obvious, Labour's Phil Goff is on record as saying that there is no alternative to the free market. According to the Labour leader : 'a well-functioning market system is the most effective and efficient way of organising an economy'.

You kind of wonder if Goff has been living on another planet for the past two years or so - but his view is dominant within the Labour Party itself. And no one in his caucus is opposing it.

Despite the best efforts of people like Chris Trotter and Martyn Bradbury to falsely portray Labour as a party that has broken with neoliberalism, the reality is that all Phil Goff has to offer ordinary people is his assertion that Labour can run the free market 'better' than National.

And if you're thinking that perhaps the Green Party have something different to offer, then think again. Co-leader Russel Norman has pushed the party well to the right. Norman and the Green's believe in the nonsense that is eco-capitalism. Norman and the Greens don't want to overthrow the free market - they just want to, in Norman's words, 'transform it to make it sustainable'.

So the zombie ideas of neoliberalism continue to hold sway over public policymaking and the general election result will not change that - no matter who becomes the government.

Of course when we speak of the failure of neoliberalism we need to bear in mind that neoliberalism was - and is -all about clawing back the real economic gains that the working class made in the post war era and reasserting the power and dominance of capital.

New Zealand has been no different. The reaction against 'Muldoonism' was the precursor to a much wider assault on the advances the working class made within the Keynesian-inspired 'Fortress New Zealand'.

'Does this crisis signal the end of neoliberalism? My answer is that it depends what you mean by neoliberalism. My interpretation is that it's a class project, now masked by a lot of rhetoric about individual freedom, liberty, personal responsibility, privatisation and the free market. That rhetoric was a means towards the restoration and consolidation of class power, and that neoliberal project has been fairly successful.'

But how are we to slay the zombies of neoliberalism?

'Whether we can get out of this crisis in a different way depends very much upon the balance of class forces. It depends upon the degree to which the entire population says 'enough is enough, let's change this system'. Right now, when you look at what's been happening to workers over the last 50 years, they have got almost nothing out of this system. But they haven't risen up in revolt. In the US over the last seven or eight years, the condition of the working classes in general has deteriorated, but there has been no mass movement against this. Finance capitalism could survive the crisis, but whether it does depends entirely upon the degree to which there is going to be popular revolt against what is happening, and a real push to try to reconfigure how the economy works.'

In New Zealand we should be opposing and demonstrating against the austerity policies of the Key Government but, equally, we should be rejecting the empty promises of the Labour Party and its backers within the trade union bureaucracy. That road also leads to further defeats for working people.

In the 1980s Margaret Thatcher said that 'there is no alternative' to the free market and some thirty years later Phil Goff is saying exactly the same thing. But he isn't alone. So are all the other leaders of the political parties that presently occupy Parliament and claim to be 'our representatives'.

We need to break and destroy the neoliberal consensus that has dominated for too long and which threatens to dominate into the future.

We need a new politics that breaks with the discredited parties that still pretend that they represent us.

Out with the old politics.
Posted by Steven Cowan on Tuesday, January 11, 2011