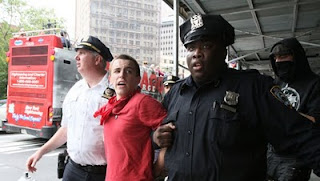 While you wouldn't know it from the absence of coverage in the mainstream media, the occupation of Wall Street is continuing into its second week.... and the arrests have begun.

On Saturday approximately 80 Occupy Wall Street demonstrators were arrested. The arrests occurred when the protestors, who are camped out near the New York Stock Exchange, marched through Lower Manhattan.

Occupy Wall Street reported at least one protestor was arrested for taking photographs. An NYPD spokesman said police were not targeting those with cameras.

Meanwhile documentary maker Michael Moore has slammed the corporate media for failing to report on the continuing demonstration, commenting that Occupy Wall Street was the beginning of a new political movement in the United States. 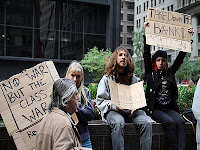